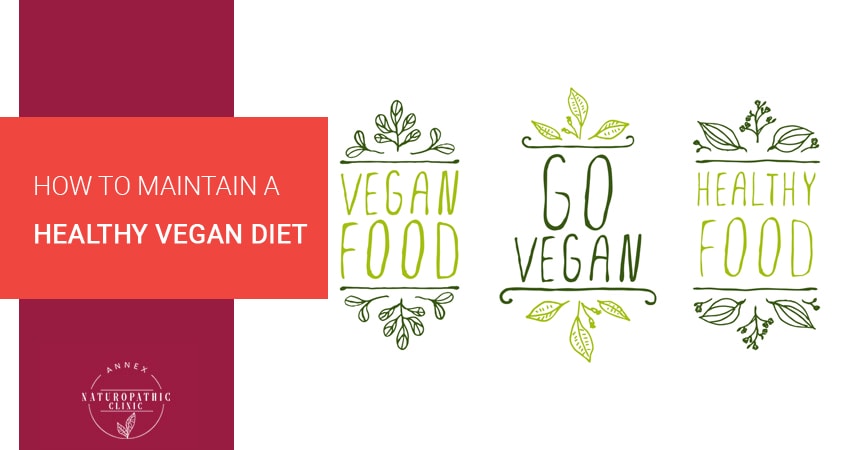 How To Maintain A Healthy Vegan Diet

Growing in popularity, many people are turning to vegan diets for a variety of reasons.

Whether your goal is to lose weight, to better support the environment, or to not participate in the exploitation of animals, a vegan diet can be a great way to achieve a number of good results.

The important thing is to make sure that you are careful and maintain a healthy vegan diet in order to fully enjoy its many health benefits.

This is because it is easy to overlook key nutrients if you are subsisting only on plant-based foods, which also increases your risk of being deficient in those nutrients.

The best way to keep track and make sure that you’re doing a vegan diet the right way is to enlist the help of a local naturopathic doctor.

Speaking of which, if you’re looking for a naturopathic consultation in Toronto, we’re here at Annex Naturopathic Clinic for all of your dietary needs.

What Is A Vegan Diet

A vegan diet is a diet that does not contain any animal products including meat, eggs, and dairy.

As an extension of this, veganism is a way of life that excludes all forms of animal products – not just food – in order to protest and not participate in the cruel exploitation of animals.

Why Do People Eat A Vegan Diet?

As mentioned above, people go vegan for a variety of reasons that can be either health-related or ethical in nature.

Let’s focus on the health benefits.

Vegans tend to have a lower body mass index than non-vegans and so it can be a helpful diet for reaching your weight loss goals.

Another benefit is that a vegan diet can help to manage blood sugar and type 2 diabetes.

It has also been known to have a positive effect on heart health, with vegans having a much lower risk of developing high blood pressure or heart disease.

This makes it a useful natural solution for heart disease.

Nutrients Vegans Should Pay Attention To

It’s important to remember that something isn’t automatically healthy just because it’s vegan.

Oreo cookies are a great example of this – they contain no animal products, which makes them safe to eat on a vegan diet, but nobody would ever argue they’re healthy.

Now, there are a number of important nutrients to pay attention to if you are considering a vegan diet.

This is because they’re difficult to consume sufficient amounts of from strictly plant sources.

For this reason, supplements are often necessary to complete a healthy vegan diet.

Let’s dive into five main nutrients to be mindful of below.

Vitamin D is a multi-functioning nutrient that is essential for a number of body functions.

It’s one vitamin that can be produced by your skin when it is in contact with sunlight.

But, in colder climates due to a lack of sun exposure, vitamin D is often required to be sourced from either food or supplements.

Symptoms of vitamin D deficiency can include:

Vitamin D deficiency has also been linked with a number of digestive disorders, like celiac disease, cystic fibrosis, and Crohn’s disease

There are two main types of vitamin D that have food sources.

One type – ergocalciferol (D2) – comes from plants and the second – cholecalciferol (D3) – is found in foods that derive from animals.

Vitamin D can be challenging for vegans because it is easier for your body to absorb the D3 vitamin D into your blood than the D2.

You need to be careful that you’re getting sufficient amounts if you opt for the D2 type by accounting for the lower absorption rate.

This is particularly important for Canadians, and our neighbours from the more northern United States. 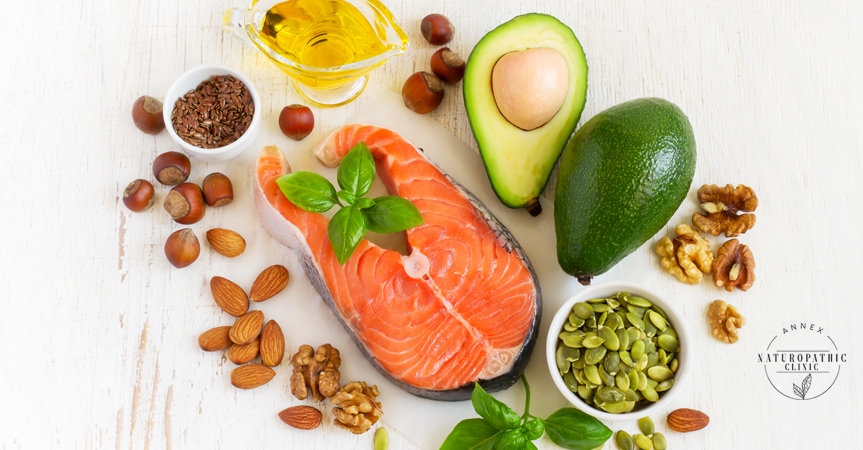 There are two different types of iron – heme iron, and non-heme iron.

Because plant-based iron is difficult to absorb, you need to pay extra attention to maintaining adequate levels in order to avoid anemia.

Iron deficiency has been linked with a number of different health issues, including female pattern baldness, anemia, pale or sallow skin, chronic fatigue, and of course anemia.

With careful planning, there are many vegan sources of non-heme iron like leafy greens, whole grains, legumes, nuts and seeds.

You can also get iron from a supplement, but too much iron can be dangerous.

Consult with your naturopathic doctor before you begin supplementing with iron.

Vitamin B12 is a tricky essential nutrient that is found primarily in animal-based foods like fish, meat, and dairy.

It is a nutrient that helps to develop red blood cells, maintain nerves and support normal brain function.

Again, because of its animal sources, vegans can be at a higher risk of developing a vitamin B12 deficiency.

Symptoms of B12 deficiency include:

Vegan Sources Of Vitamin B12

It is heavily recommended to get your vitamin B12 by taking supplements or eating vegan foods specifically fortified with this nutrient.

There are a few plant foods that contain trace elements of vitamin B12, but they are truly trace amounts and it would be very difficult to get enough vitamin B12 from plants without a supplement.

Omega 3 fatty acids are nutrients that are important for brain function and development.

One specific omega 3 fatty acid that vegans need to make sure to get enough of is docosahexaenoic acid (DHA) because a lack of it can have negative effects on both brain function and mental health.

This is especially true for those who are pregnant because DHA also supports the healthy development of the fetal brain.

It’s challenging for vegans to get because it is mainly found in fish oil, fatty fish and a couple of types of micro algae.

This is why vegans not monitoring their nutrient intake tend to generally have lower levels of DHA than omnivores.

Vegans can get concentrated supplements that source omega 3 fatty acids and DHA from an oil made from micro algae.

Finally, L-creatine is an amino acid prevalent in animal foods that functions as an energy reserve for muscle cells, improving their strength and endurance.

It is found primarily in your muscles and in your brains, which is why it is a popular supplement for gaining muscle.

While it’s not essential in the way the other four items on this list are, vegans tend to have lower amounts of creatine in their muscles and so it is definitely something to keep an eye if you are physically active.

Creatine is only found in animal tissue in any significant amount.

If you’re concerned about your creatine levels, there are vegan creatine supplements available that can help.

However, there’s a roundabout way of getting there through your diet.

Your liver can synthesize creatine from arginine, glycine, and methionine.

And there are plenty of good vegan sources for these.

You can get arginine from:

Glycine, meanwhile, can be found in:

And finally, get your methionine from:

If you’re not sure where to start, don’t worry!

There is a lot to take in when considering a vegan diet and this article only scratches the surface.

Naturopathic doctors are a great resource to help you plan a healthy vegan diet.

They can recommend supplements that are the best overall fit for your personal health goals.

Book an appointment today with the Annex Naturopathic Clinic to get started on your vegan wellness journey.