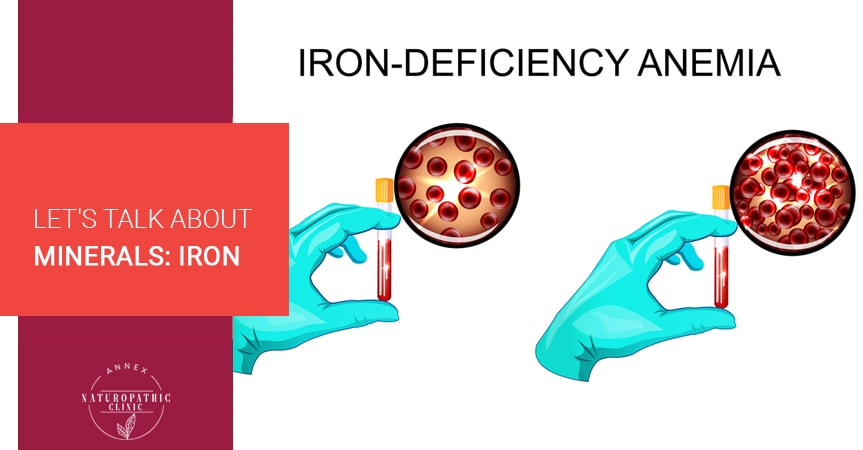 Vitamins and minerals, though only needed in small amounts, are vital to healthy operation of the body.

They are micronutrients, meaning you need much smaller amounts of them than macronutrients, like proteins and carbohydrates, but they are equally important.

Figuring out what different vitamins and minerals do to help your body can be confusing, but it doesn’t have to be.

Understanding what your body needs can help you figure out when you’re not getting enough of something and how to fix any problems that do arise and Annex Naturopathic clinic, a naturopathic doctor in Toronto, can help you do that.

Iron is a fascinating mineral: you can build bridges out of it, you can use it in tools, and your body needs it to function properly.

In this article we’re going to delve into what iron is, what your body needs it for, and what can happen if you’re not getting enough of it.

Iron is a mineral used to build some of the proteins necessary for life.

It’s used primarily to carry and store oxygen in the body, as iron and oxygen will readily form chemical bonds with each other.

Hemoglobin, an important protein in red blood cells, uses iron to carry oxygen through the bloodstream to organs and tissues that need it.

Iron is also part of the protein myoglobin, which binds oxygen into muscle cells.

While getting enough iron in your diet is important, not all iron is created equal in terms of how much of it you need to meet nutritional requirements.

Dietary iron can be split into two categories: heme and non-heme.

Heme iron is the type of iron stored in and acquired from animal tissues.

In terms of dietary sources, it can only come from meat, fish, and poultry though these sources also contain some non-heme iron.

Non-heme iron is the type obtained from plant sources and is more difficult for the body to absorb.

The iron in milk and milk alternatives, as well as eggs is also non-heme iron.

Heme iron is more easily absorbed by the body, and less likely to have its absorption disrupted by other nutrients in a meal.

The symptoms of iron deficiency can be hard to spot, especially at first since they can feel like simply being tired, run down, or getting sick with a cold.

The symptoms are primarily caused by iron deficiency anemia (IDA), rather than by low dietary iron over short periods of time.

We’ll get into more detail about what IDA does to your body later on.

The symptoms of iron deficiency anemia include:

This is not a complete list of symptoms and if you’re feeling persistently unwell then a trip to see a medical professional is always a good idea. 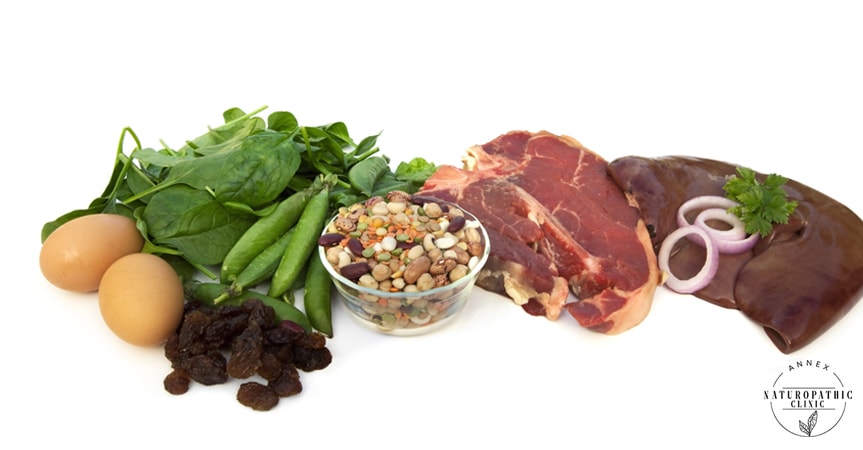 Non-heme iron can be found primarily in plant-based foods, such as cooked spinach or other dark leafy greens, nuts and seeds, enriched grains, and beans and lentils.

Soy is also especially high in non-heme iron, whether eaten as cooked soybeans or as tofu.

What Is Iron Deficiency Anemia?

The iron-containing proteins we talked about earlier are an essential part of how oxygen gets to where it needs to go in the body.

If your body doesn’t have enough iron to work with, it can’t build those proteins, so it starts having trouble getting oxygen to where it needs to go.

While IDA is caused by a lack of iron, the adverse health effects are caused by lack of oxygen in the organs and tissues that need it.

Iron needs can vary with age among other biological factors.

These factors, among others, make iron deficiency most common in people who are pregnant or menstruating, as well as in small children and adults over 65.

Iron deficiency anemia is generally diagnosed with a blood test that looks at the levels of hemoglobin in the blood.

Since a hemoglobin test is a routine part of donating blood, many people discover that they’re anemic when they go to do so.

The symptoms of iron deficiency can be frustrating to deal with.

Feeling constantly exhausted can make it difficult even to find energy to get the help you need.

If you think you may be suffering from iron deficiency, Annex Naturopathic can help.

Book an appointment today to find solutions for your nutritional issues so you can get back to feeling your best.