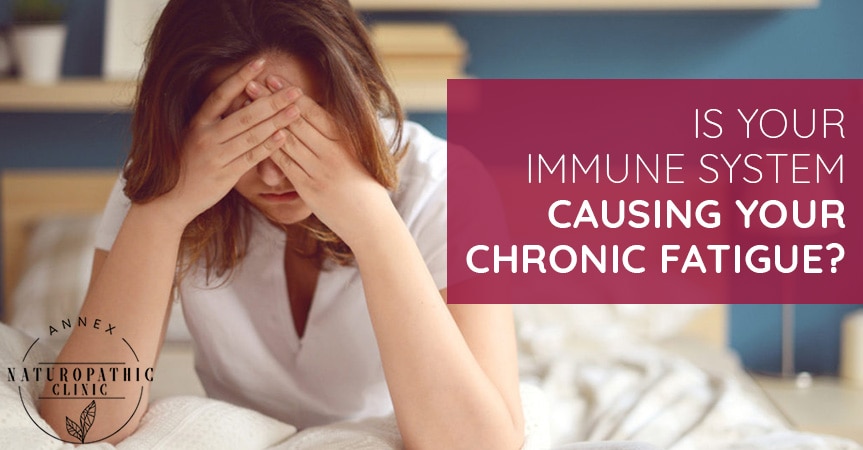 Is Your Immune System Causing Your Chronic Fatigue?

Chronic fatigue is a condition that is commonly experienced my many people. If chronic fatigue isn’t linked to an obvious condition, such as iron deficiency, it is difficult to understand where its symptoms may be coming from – often times it’s linked with a number of imbalances.

When patients do finally decide to visit a naturopathic doctor, they often have the same common questions about naturopathic medicine and how it might help them and their symptoms.

It’s not uncommon,for chronic fatigue symptoms to be linked to autoimmune issues. Let’s talk about them today.

What Is Chronic Fatigue?

Chronic fatigue syndrome – also known as CFS – is diagnosed when you’ve felt fatigued for over six months and have also suffered from several ‘cognitive difficulties’.

There is a difference between acute fatigue and chronic fatigue:

With acute fatigue, you’re tired after a long day, or because you didn’t sleep well the night before – typically coming from an obvious reason that occurred within a short period of when you felt fatigued. In acute fatigue, you feel more or less normal after a day or two of getting back to your regular schedule.

With chronic fatigue, there appears to be no obvious reason why you’re feeling tired. You can have a relaxing, restful day, get a good night’s sleep, and yet still feel exhausted. That’s not right.

What Happens To Your Body If You Have Chronic Fatigue?

By “cognitive difficulties,” what doctors look for are the following:

• Poor sleep, causing you to waken feeling unrefreshed
• Headaches that are new in type, pattern or severity
• Substantial impairment in short-term memory and/or concentration
• Sore throat or tender lymph nodes
• Muscle or joint pain (with no swelling or redness)
• “Post-exertional malaise” that lasts longer than 24 hours

If you meet at least four of these for longer than six months, you’re considered chronically fatigued.

You may also experience brain fog, an “energy shift”, and inflammation. Let’s look at each of those more closely.

What is brain fog? It’s often described by those who suffer from it as difficulty concentrating, remembering, focusing, slower thinking, as well as a general haziness in the regular cognitive processes.

According to a 2013 paper in the journal Frontiers of Physiology, testing of those who suffer from chronic fatigue syndrome has revealed that several of the brain’s key functions are impaired. This includes the ability to pay attention, concentrate, preserve memories, and the efficiency and speed of processing information.

Essentially, the brain of those with chronic fatigue just doesn’t work quite as well as it should.

People suffering from chronic fatigue are more likely to have increased levels of pro-inflammatory cytokines.

A study done by Mark Davis at the Stanford University School of Medicine revealed that the more severe the case of chronic fatigue syndrome, the more prevalent pro-inflammatory proteins were in the patient.

These are immune activity markers, and the research has shown that the higher these markers, the worse the symptoms of the patient.

So why is this a problem? These pro-inflammatory proteins play a role in your body’s immune system – having excessive amounts being produced has been linked to detrimental effects on the kidneys, and with a number of chronic health disorders beyond chronic fatigue syndrome.

Most people will generate energy from the glucose, fatty acids, amino acids,and nutrients their bodies produce and ingest. In chronic fatigue, patients aren’t able to metabolize and utilize that energy in the same way, or may be deficient in multiple nutrients required for proper energy production.

This can be a major problem – proper nutrition is important not only in the fight against chronic fatigue but many other disorders as well. However, if your body isn’t able to absorb the nutrients it needs to get better, it becomes difficult to heal.

Among other things, having your nutrient stores running low is one of the factors linked with chronic fatigue syndrome. 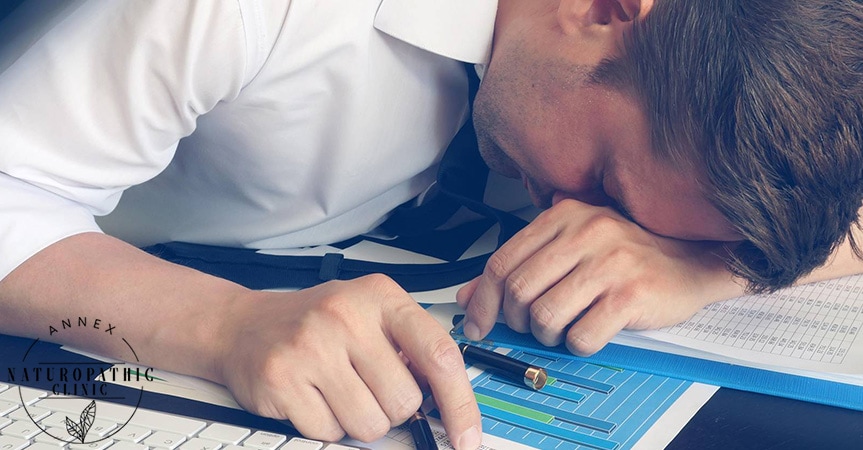 So now that we know what chronic fatigue symptoms are and how it manifests, let’s look at a few ways to help you get through to the other side of it.

Reducing stress is crucial for your body to function optimally; stress and anxiety can make a large impact on various organs, functions, reactions and processes because it creates inflammation in the body.

Doing regular exercise such as yoga, or taking a meditation or mindfulness class can help you to breathe deeply, activating the relaxation system, and better manage your stress.

Of course, this can be easier said than done. But it isn’t necessary for you to be living a perfectly Zen life – even moderate reductions in stress can make a noticeable difference.

2. Increase Your Intake Of Healthy Fats

There is a brain-body connection that we can control through our diet – healthy brain function depends on the foods we eat, and as the brain is roughly 60% fat, the fats in our diet can make an impact on our cognitive health.

Avoid trans fats such as those found in processed meat and other processed foods, and add/increase healthy fats such as olive oil, omega 3s, salmon, avocados, nuts and flax seed.

That said, if your body is having trouble absorbing these nutrients, you may see diminishing returns. In cases like that, it’s a good idea to see a naturopathic doctor.

Elimination diets are good for identifying allergies, food sensitivities, and triggers for the immune system that can be the cause of fatigue-inducing inflammation.

One of our Naturopathic Doctors can help you strategize a proper elimination diet that will work with your lifestyle.

Have you been feeling run down, or without the same energy level you’re used to?

If you’ve read this article and wonder if some of these may be at the root of your tiredness, it’s time to see a naturopath about your symptoms.

Call now for an assessment at Annex Naturopathic, and we’ll help you improve your energy levels so you can get back to living.