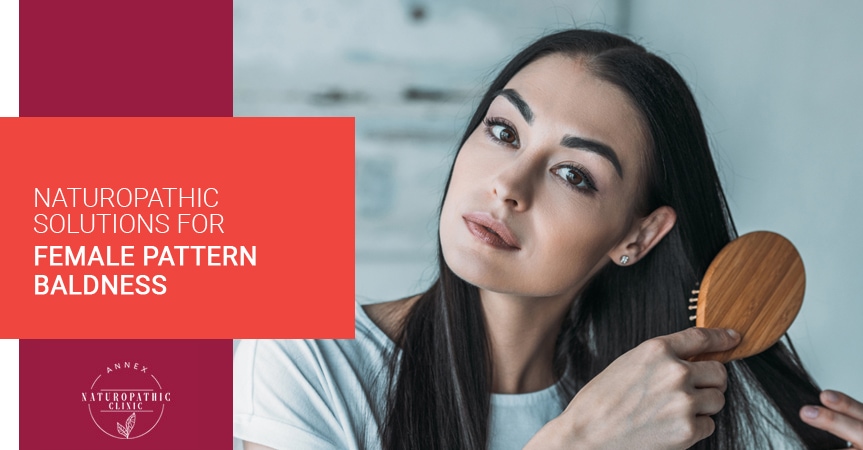 Hair loss in women may be difficult to notice at first, with a few extra hairs coming out in the shower or while brushing your hair.

It can be easy to miss, especially if you’re unfamiliar with the patterns it can take, but catching it early can be key to getting ahead of the problem and reversing the hair loss.

Aging can come with its fair share of health concerns, but Annex Naturopathic is here to help, with natural solutions for women’s health.

Hair loss in women can be caused by many factors from hormonal regulation issues and nutrient deficiency to stress.

In this article we’re going to take a look at the different types of female pattern baldness and the variety of factors that can cause it.

What Is Female-Pattern Baldness?

Female pattern baldness, also known as androgenic alopecia, is a condition that results in hair loss in women as they age.

Though it does share some traits with male pattern baldness, the patterns of hair loss and the factors that cause it do differ somewhat.

Female pattern baldness is quite common, with more than fifty percent of women experiencing some type of hair loss by the age of 65.

It can be caused by genetics and age, and generally isn’t something to be concerned about, though it can sometimes be caused by health conditions that may affect the body negatively in other areas.

What Are The Three Types Of Female Pattern Baldness?

It can be divided into three different categories based on where hair thinning occurs.

Type I is the least severe and involves only minor thinning around the part line of the hair.

Type II is characterized by a widening of the part line and thinning in the areas around it.

Type III is the most severe and involves hair loss throughout the scalp, often leaving a see through area of hair at the top of the head.

The hair loss patterns are useful in determining if the cause of the hair loss is caused by genetic female pattern baldness or other factors.

Female pattern baldness is an umbrella term for several different types of hair loss that are caused by a variety of factors.

While some of the causes have hair loss as their main symptom, others can cause issues in other areas of health as well.

Testosterone is a hormone present in people of every gender to some degree.

It helps regulate sex drive, as well as assisting the body in maintaining muscle and bone health.

Dihydrotestosterone (DHT) is a by-product from the production of testosterone in the body, and it is responsible for both male and female pattern baldness.

DHT interacts with the hair follicles in a way that stops hair from growing and causes it to fall out.

This can lead to thinning hair and a noticeable uptick in hair falling out.

Hormonally caused hair loss can be the most permanent type if it isn’t treated early because the damage to the hair follicles can stop hair from regrowing.

During menopause, the body’s production of the hormones estrogen and progesterone decrease.

This can increase sensitivity to DHT, and cause hair loss through the same mechanism as testosterone imbalance can.

Menopausal hair loss occurs in most people to some extent, but it can become more of an issue if it’s combined with genetic DHT sensitivity,

Iron deficiency, or anemia, is what happens when your body isn’t getting enough iron from dietary sources to make hemoglobin, the protein in red blood cells that carries oxygen.

Lack of iron can interfere with many of your body’s natural processes, and hair growth is no exception.

Iron deficiency is diagnosed using a blood test, and dietary changes or supplements can be used as treatments for it.

Because the lack of iron is reversible, once the iron deficiency is treated the lost hair will grow back.

Other symptoms of low iron include:

The thyroid gland is part of your endocrine system .

It regulates the release of thyroid hormones with many different roles in the body, one of which is the regulation of new hair production.

If you have either an overactive or an underactive thyroid gland, it can lead to hair loss as the hairs lost in a normal day aren’t replaced.

There are different natural treatments for thyroid issues, and talking to your naturopathic doctor will let you know which one is right for you.

Like hair loss caused by iron deficiency, once the underlying issue is addressed your hair will grow back to its original thickness over time.

It’s no secret that long term stress can have a negative impact on health, and hair loss is no exception.

Referred to as telogen effluvium, stress caused hair loss generally occurs two to three months after the stressor that caused it appears.

Stress causes hair loss by pushing more hair than usual into the final stage of the hair growth cycle, in which it stops growing and falls out.

If the stressor is temporary the hair loss may go away on its own, but otherwise the hair loss can be slowed or reversed using a combination of medication and lifestyle changes.

Many factors can lead to hair loss, but it’s thought that the most common is genetics.

There are a number of genes that are linked to hair loss, but if your parents or other close relatives have experienced hair loss it’s more likely that you will too.

Genetics can create a sensitivity to DHT, a predisposition to thyroid problems or anemia, or an increased physical response to stress among other impacts.

Because genetics often go hand in hand with other factors that cause female pattern baldness, different approaches to treatment will work better for different people.

Many types of hair loss are reversible if they are met with appropriate treatments.

For those types that aren’t reversible it’s all the more important to catch them early so you can prevent further hair loss.

Naturopathic medicine can help with hair loss and to address the underlying issues that can cause it.

If you’re suffering from female patter baldness, book an appointment with Annex Naturopathic to get to the, ahem, root cause of your hair loss and find treatments to put a stop to it.