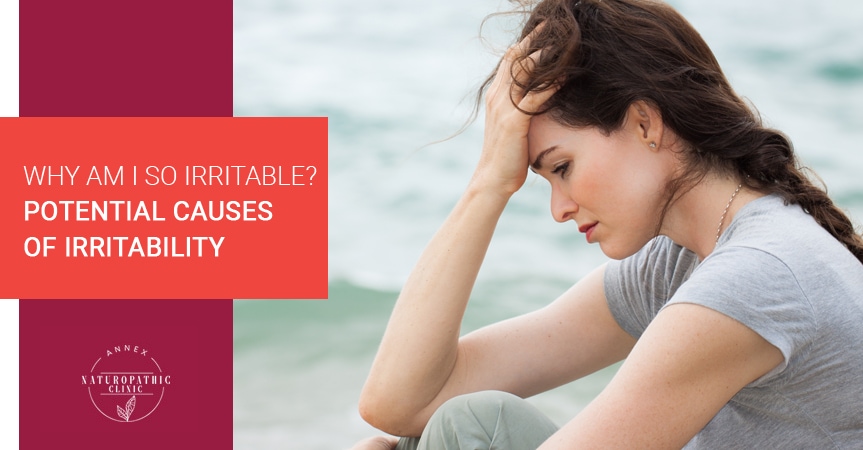 Why Am I So Irritable? Potential Causes Of Irritability

Everyone has “off” days.

Days where you just don’t want to deal with other people, and where every little thing seems to be a major inconvenience.

However, if these start to become a regular pattern, then there might be something more going on.

If you’re finding you’re having more days where every little thing seems to irritate you than days where you can brush it off, it might be time to look into hormonal conditions solutions to tackle the cause of your irritability.

Irritability, also referred to as agitation is when you become annoyed, upset, or frustrated very easily.

It’s often a response to being under stress, and can also indicate physical or mental health conditions.

For example, children often display irritability when they are experiencing stomach aches or earaches.

Keep reading to learn more about some of the reasons for irritability in adults.

There are a number of factors which can cause irritability in adults.

Irritability is a part of life – it might just be that you had trouble falling asleep last night or you’re having trouble managing your stress.

However, if it becomes a regular occurrence it’s worth looking into the root cause.

In this section, we will have a look at conditions which can lead to irritability.

Also called hypoglycemia, low blood sugar occurs when there are increased insulin levels in the body.

Reasons for this may include eating too little or exercising too much.

It is often a side effect of medications meant to manage diabetes as well, including glyburide for type 2 diabetes

Other symptoms of low blood sugar include:

In cases of mild to moderate low blood sugar, eating or drinking something containing sugar, such as juice, honey, or a couple of pieces of hard candy can help manage symptoms.

It may sound strange for a naturopathic doctor in Toronto to advise you to eat candy, but in cases of low blood sugar the benefits outweigh the drawbacks.

Severe cases of low blood sugar can result in loss of consciousness and require medical attention.

Hormonal imbalances and changes can be a result of a number of conditions including:

We will look at each of these in more detail.

The thyroid is a small, butterfly shaped gland in the neck which is responsible for creating thyroid hormones.

Hyperthyroidism occurs when too much of these hormones are produced, due to tumours of the thyroid gland, too much iodine, inflammation of the thyroid, or conditions such as Graves’ disease.

Symptoms of hyperthyroidism include:

If you or someone close to you has ever attempted to give up coffee or cigarettes, then you’re likely aware that those going through substance withdrawal can be irritable.

In addition to irritability, withdrawal symptoms for caffeine and nicotine tend to overlap and include: 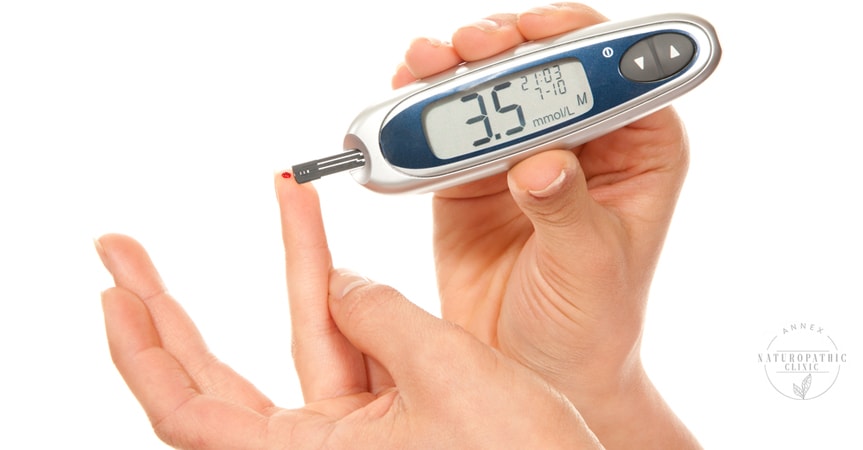 Diabetes is a condition in which the body has trouble regulating the amount of blood sugar due to not having enough insulin, or not using the insulin it does have efficiently.

Type 2 diabetes is when the body develops a resistance to insulin and can’t use it properly.

Menopause is when a person who menstruates has gone 12 months without menstruating and is no longer capable of becoming pregnant.

It typically occurs between the age of 45 and 55, however, sometimes can be earlier.

Polycystic ovary syndrome, or PCOS, occurs when the ovaries produce higher than expected levels of androgens such as testosterone.

PCOS can result in irregular periods, and cysts developing on the ovaries.

Other symptoms can include hair growth on the face and body, acne, weight gain, and hair loss.

Premenstrual syndrome occurs in over 90 percent of people who menstruate.

These symptoms will generally show up 5 to 10 days before menstruation begins.

Its cause is not known; however, researchers believe it’s likely related to changes in hormone levels associated with the menstrual cycle.

Getting a good night’s sleep is one of the most important things you can do for your health.

There are a multitude of reasons why you may not be getting a good night’s sleep, including too much caffeine, eating unhealthy foods, and irregular work schedules (such as flipping between night and day shift or working mostly at night).

In addition to poor sleep quality, you might experience:

If you’ve been feeling extra irritable lately, it may help to take a step back and try to determine the reason for it.

You might be able to pinpoint it right away – for instance, you may realize you haven’t been sleeping well.

Or it might be a bit more difficult to figure out, such as a hormone imbalance which requires further testing to confirm.

Whatever the reason for your irritability, Annex Naturopathic can help.

We will work with you to determine why you are experiencing these symptoms, and then create a personalized plan to provide treatment for their underlying cause.

Contact us today for more information or to set up an appointment.

Take Charge of Your Health & Wellbeing
Our naturopathic doctors can help you regain control of your health.
Book Your Appointment Now