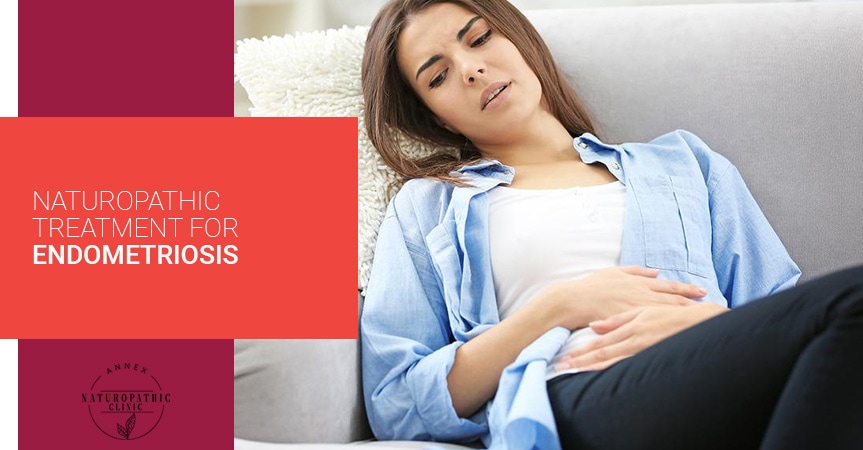 Endometriosis is a relatively common condition that can cause massive amounts of pain and discomfort, especially around your period.

If you’re dealing with endometriosis, you aren’t alone — and there are naturopathic treatments to help alleviate your symptoms.

Today, we’re going to look at some of the most effective natural treatments for endometriosis.

Take Charge of Your Health & Wellbeing
Our naturopathic doctors can help you regain control of your health.
Book an Appointment

Endometriosis is a chronic disorder that causes tissue to grow endometrial tissue on organs outside your uterine cavity.

This tissue can grow on your ovaries, pelvic lining, and bowel.

Your uterine lining, or endometrium, is lined with a similar tissue.

Menstruation causes your hormone levels to fluctuate, which inflames this extra tissue.

The misplaced tissue will grow and thicken, eventually breaking down without any means of leaving your pelvic area.

This can lead to a number of uncomfortable and painful symptoms, which often spike around your period.

Unfortunately, the exact cause of endometriosis is unknown.

There are some theories that have circulated for years, such as “retrograde menstruation”.

Retrograde menstruation occurs when menstrual blood enters your pelvic cavity via the fallopian tubes instead of leaving your body through your vagina like normal.

Others speculate endometriosis may be caused by an issue with the immune system, the transportation of uterine cells through the lymphatic system, or cell tissue misplaced during the fetal period reacting to hormones during puberty.

There are so many potential causes and yet, we do not ultimately know what causes endometriosis.

What we do know is it ranges in severity, which we track through four stages: minimal, mild, moderate, and severe.

Like many other chronic illnesses, the symptom severity can vary.

However, the degree of pain or discomfort you feel does not necessarily correlate to the severity of your condition.

Let’s look at the signs and symptoms associated with endometriosis.

Regardless of severity, the most commonly experienced symptom of endometriosis is pelvic pain.

There are a number of additional symptoms caused by the inflamed misplaced tissue, including:

If you’re experiencing these symptoms, talk to your doctor to investigate whether endometriosis may be the cause.

Endometriosis can be immensely painful, especially during your period.

The efficacy of treatment options varies depending on your specific symptoms, and your naturopathic doctor or other medical provider can help you find which one is right for you and your body.

Endometriosis presents both acute and long-term issues, so some treatments are geared at reducing overall inflammation while others are meant to help with current symptoms.

Overall, it’s important to ease pain and your stress response while also tackling the bigger issues like supporting your immune system, balancing hormone levels, and encouraging a healthy inflammatory response.

Hormone levels are crucial when it comes to managing the inflammation and symptoms of endometriosis.

Endometriosis has been connected to high levels of estrogen, which is responsible for endometrial tissue growth.

Reducing or limiting estrogen production can be beneficial for endometriosis treatment.

Bioidentical hormone replacement therapy, or BHRT, is the supplementation of two of your body’s natural hormones – estrogen and progesterone.

Progesterone is a hormone that counteracts estrogen, limiting the production of endometrial tissue and ultimately reducing your symptoms.

BHRT may be an effective natural solution for endometriosis, because it targets the problem at its source: fluctuating hormone levels, and improper tissue growth.

The natural progesterone used in this kind of BHRT is derived from plant oils and fats, and modified to be identical to the progesterone produced by your body.

If you’re interested in pursuing the benefits of this hormone therapy, talk to your naturopathic doctor for more information.

Known as the main compound in turmeric responsible for its bright orange-yellow hue, curcumin is an anti-inflammatory antioxidant.

Not only that, but it also slows the growth of endometrial cells by inhibiting estradiol production.

Estradiol is one of three types of estrogen produced by the human body.

Turmeric is the best dietary source of curcumin, though to ensure maximum absorption you should look to consume black pepper alongside turmeric.

This is because the piperine in black pepper boosts curcumin absorption.

Consuming turmeric alongside healthy fats also increases its effectiveness by causing the curcumin to be absorbed straight into your blood stream.

Inflammation can be caused and worsened by a variety of factors, but one of the main causes is prostaglandins.

Prostaglandins are a group of fatty acids responsible for menstrual cramps and endometrial pain.

Not all prostaglandins are “bad”, however; there are also “good” ones known to decrease inflammation.

The important thing is to ensure there is a balance of these fatty acids within your body.

Omega-3 fatty acids are beneficial for those with endometriosis because your body converts them to anti-inflammatory prostaglandins.

Plus, they help reduce the production of “bad” prostaglandins that cause inflammation (which can be found in red meat and dairy).

The best dietary sources of omega-3s are fatty fish such as salmon and tuna, as well as nuts and seeds.

Omega-3 fatty acid supplements are also easy to find at most dispensaries and health food stores.

The benefits of acupuncture are wide-reaching and may be an effective treatment to help with endometriosis.

Acupuncture, one of the main components of traditional Chinese medicine, is a process in which tiny needles are inserted along certain points of your body.

This treatment may alleviate inflammation and reduce stress, as well as reduce the abdominal and pelvic pain associated with endometriosis.

Additionally, acupuncture has an impact on the growth of endometrial tissue outside of the uterus.

The foods you eat can have a big impact on your health, especially if you’re suffering from a chronic inflammatory condition like endometriosis.

Studies have shown the link between diet and endometriosis, with foods like fruits and vegetables decreasing your risk of developing this disorder.

Certain foods are known to increase your chances of developing endometriosis and worsen inflammation in existing cases, such as red meat.

Another reason to avoid meat as well as high-fat dairy products is due to toxins known to accumulate in animal-based fats.

These toxins, dioxin and polychlorinated byphenyls (PCBs), can exacerbate endometriosis symptoms and severity.

High-fibre foods are a great option to help regulate your gastrointestinal system, which has a strong overall impact on inflammation.

You may not have heard of isoflavones, but they are a powerful tool in your fight against endometriosis and its associated symptoms.

Isoflavones are plant-based chemicals that inhibit the conversion of androgens to estrogens, and they block more potent natural estrogens from binding to the relevant receptor.

Good dietary sources of isoflavones include:

Indoles, an organic compound found in cruciferous vegetables such as broccoli and cabbage, have similar anti-estrogen effects.

The pain of endometriosis can be unbearable, and it may seem like you’ve run out of options.

There are naturopathic treatment solutions that can have a profound impact on your condition, thereby improving your overall quality of life.

For more resources and information on natural endometriosis treatment options, contact us at Annex Naturopathic.

Our women-lead team of experienced naturopaths would love to work with you on a personalized treatment plan that fits your lifestyle.

You don’t have to suffer in silence — we’re here to help.