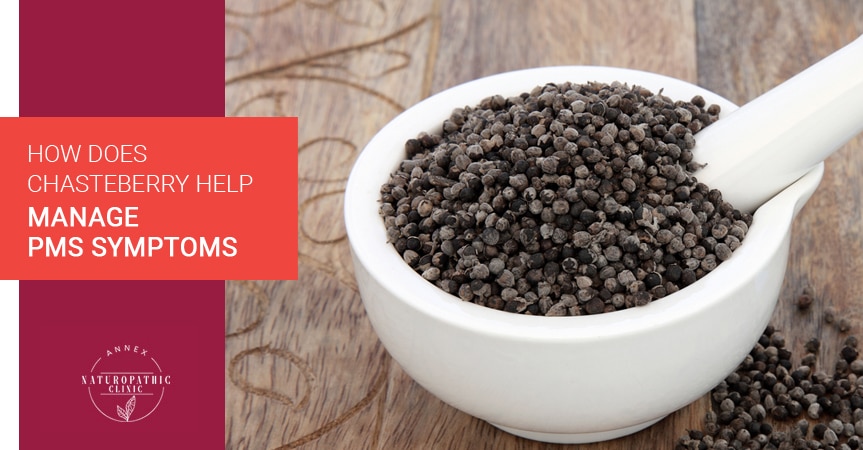 If you struggle with PMS, you know how frustrating it can be.

But while there are a number of treatments available for it, one of the most interesting approaches is through herbal medicine.

As a naturopathic clinic for women’s health and menstrual health in general, we’d like to take a look at some solutions to help address PMS.

Today we’ll be looking at Chasteberry, a common herbal solution for PMS.

We’ll explore what it is, where it comes from, and some of the science behind why it can help.

But first, let’s get a better understanding of PMS in the first place.

Improve your health naturally, with the help of experienced naturopathic doctors

PMS, or premenstrual syndrome, refers to a collection of symptoms that tend to ebb and flow along with your monthly cycle.

Women and others who menstruate can face a wide variety of different symptoms.

These symptoms can be broken into two categories: physical and psychological.

Physical symptoms of PMS can include:

Meanwhile, psychological symptoms of PMS can include:

There are 4 different types of PMS as well, each of which has different severities of symptoms.

PMS-C is associated with cravings, in particular junk food cravings.

With PMS-C, you may experience:

Part of the reason for these cravings is because of low serotonin levels.

Eating foods heavy in carbohydrates can temporarily boost your serotonin levels, which is part of why eating them feels so good.

PMS-D is most associated with depression.

This is linked again with low serotonin, but another common underlying issue is an underactive thyroid and a resulting deficiency in thyroid hormones.

PMS-H is most closely related to water retention – the H stands for hydration.

Underlying issues that can be linked with this include estrogen dominance, a condition where there’s an imbalance in the hormone estrogen in your body.

It can also be linked with stress, which causes an imbalance in cortisol and aldosterone.

Improve your health naturally, with the help of experienced naturopathic doctors

Chasteberry is an herb native to the Mediterranean region of Southern Europe, North Africa, and Western Asia.

Let’s keep it simple though.

Chasteberry has two primary compounds that make it useful from a medicinal perspective.

Flavonoids are substances you can find in a wide variety of different plant-based foods and substances.

In particular, the flavonoids in chasteberry include:

Other than giving chasteberry its unique pigment, these have several beneficial properties, including acting as antioxidants, anti inflammatories, and anti virals.

The essential oils in chasteberry give it its smell and its flavour.

The individual elements in the chasteberry’s essential oils include:

Limonene in particular has been studied extensively and has many benefits.

Traditionally, chasteberry was used as both an aphrodisiac and a galactagogue – a substance that increases breast milk.

However, there is no scientific evidence for these.

There is, however, evidence that chasteberry can help manage PMS symptoms.

1. It Can Help Manage Breast Tenderness

Breast tenderness is a common symptom of PMS.

The scientific term for it is “mastalgia,” and it can have many different causes.

A 2007 study by A.R. Carmichael took a look at the evidence for using chasteberry to manage mastalgia, regardless of its cause.

Exploring a variety of data from a variety of studies, they concluded that chasteberry can be quite effective in the treatment of mastalgia.

2. It Can Help Manage Anxiety

As we explored above, anxiety is a common symptom of PMS-A.

A 2019 study by Naseri et al worked with a study group of 52 women who complained of various PMS symptoms, including anxiety.

Dividing them into two groups – a chasteberry group and a placebo group – they found the group taking chasteberry had significantly improved experience of anxiety, as well as other symptoms.

If you suffer from migraines, you know how difficult they can be.

Headaches are a typical symptom of PMS-C, but if you also suffer from migraines it can trigger those instead.

A 2012 study by Ambrosini et al studied 100 women who’d taken chasteberry for migraines related to PMS, and 92% of them reported either a dramatic or a mild reduction in PMS symptoms.

It’s a more extreme version of PMS that can include serious emotional changes, including severe depression.

However, chasteberry can help with that too.

A 2003 study by Atmaca, Kumru, and Tezcan compared the use of fluoxetine (Prozac) and chasteberry as treatment for depression associated with PMDD.

It found that fluoxetine and chasteberry had a similar rate of effectiveness at addressing pmdd symptoms, including depression.

More research is needed on the effects of chasteberry for PMDD, but this is a promising first step.

Are There Risks With Taking Chasteberry?

Side effects tend to be rare and mild, but may include:

If you’re pregnant or breastfeeding, be sure to speak with your Toronto naturopath before taking chasteberry.

As well, it might interact unfavourably with certain pharmaceuticals, including birth control pills – talk to your naturopathic doctor if you’re taking any pharmaceuticals before taking chasteberry.

Curious about chasteberry? Do you struggle with PMS symptoms and are hoping to find relief? If so, book an appointment with Annex Naturopathic today. One of our experienced and knowledgeable naturopathic doctors will listen to your concerns and put together a plan to help manage your PMS symptoms.