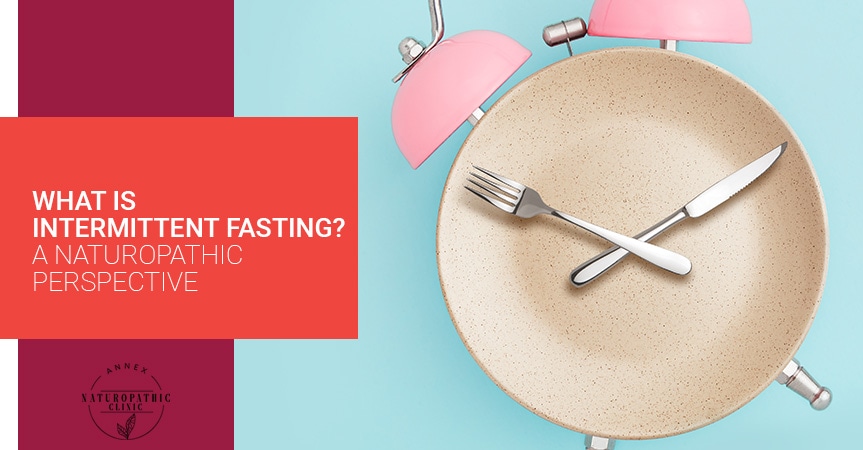 What Is Intermittent Fasting? A Naturopathic Perspective

Everywhere you look, there are health and fitness “experts” telling you what to eat, how to eat, how much to eat, and when to eat.

All of these diets have their pros and cons, and while some work great for one person, they might not be ideal for the next.

If you need assistance in sorting out all of these options, consider having a naturopathic consultation to discuss which diet or eating plan may be beneficial to you.

Today we are going to have a closer look at intermittent fasting – not another diet, per se, but a pattern which tells you when to eat and when to abstain from eating.

Keep reading to learn more about this way of eating, and the benefits it may offer.

What Is Intermittent Fasting?

Strictly speaking, intermittent fasting is an eating plan where you cycle between periods of eating and periods of fasting.

The 16/8 method is the most popular, as most people find it to be easier to stick to, and more sustainable in the long term.

What Happens When You Fast?

When you go for an extended period of time, there are a number of changes which occur in the body.

After approximately eight hours of fasting, the body has used its glucose stores and starts to burn fat instead.

Once the body runs out of fat as a source of energy, it will begin to breakdown muscle tissue, which, obviously, is something you want to avoid.

There are a number of benefits of fasting, which can include:

Keep reading for a more detailed look at some of these benefits.

1. May Help You Lose Weight

A huge reason people start following new diets or eating plans is the goal to lose a few pounds.

Whether it’s for health reasons, to look better in a bathing suit, or a little bit of both, wanting to lose a few pounds is very common.

Furthermore, by the very nature of restricting the times during which you eat, generally, the total calorie intake is lowered, so long as you don’t go overboard and binge during the times which you’re eating.

This combination of increased metabolism and fewer calories consumed can be a powerful combination for weight loss.

2. May Lower Your Risk Of Type 2 Diabetes

Intermittent fasting has been shown to reduce insulin resistance, lower blood sugar levels, and offer protection against the development of type-2 diabetes.

Studies on humans have shown that during fasting insulin may be reduced anywhere from 20 to 31 percent.

Furthermore, the effect of fasting on blood sugar is a reduction of three to six percent.

Both of these factors may lower your risk of developing type-2 diabetes.

3. May Be Good For Your Brain

There have been a few studies which have shown a positive impact of intermittent fasting on the brain.

In 2018, a study in the journal Nature Reviews, Neuroscience showed how cycles of fasting, combined with periods of eating, can optimize brain function.

This study showed benefits such as promoting neuroplasticity and resistance to brain injury and disease.

Another study, in Experimental Biology and Medicine showed intermittent fasting may be effective in protecting against cognitive deterioration as one ages.

In 2007, a study in the Annals of Nutrition and Metabolism studied healthy volunteers who were fasting for the religious holiday of Ramadan and looked at the effects of fasting on inflammation.

This study found in participants who were fasting, inflammation levels were decreased.

5. May Increase Your Lifespan

A study in the journal Gerontology found intermittent fasting to have an impressive impact on the lifespan of rats, where those who were fed a fasting diet – eating only every other day – lived 83% longer than rats not on a fasting diet.

This said it is important to note that this research is still in its early stages and more research needs to be done, however even at this early stage, there is promise.

Just like any diet or eating plan, intermittent fasting is not without its side effects.

The main one being hunger – however, generally, this is only temporary, as your body adjusts to a new eating schedule.

Additionally, there is some research to show that intermittent fasting may not have as many benefits for women as it does for men.

Studies in rats have shown it to cause female rats to miss menstrual cycles, and make them infertile.

Anecdotally, skipped periods have been reported by women attempting intermittent fasting, only to have them return when they resumed their normal eating patterns.

If you have any of the following conditions, you should discuss with your doctor before trying intermittent fasting, or any other eating plan:

Overall, though, intermittent fasting is considered to be safe, if you’re otherwise in good health.

Trying to decide on a diet or eating plan to fit your lifestyle?

Maybe you just want to be sure you are eating in a way to best fuel your body to handle everyday tasks.

We will perform a comprehensive health assessment, which looks at your medical history, lifestyle habits, and diet.

From there, one of our naturopathic doctors in Toronto will work with you to offer naturopathic solutions to any targeted issues you want to address, or just give you ways to stay healthier overall.