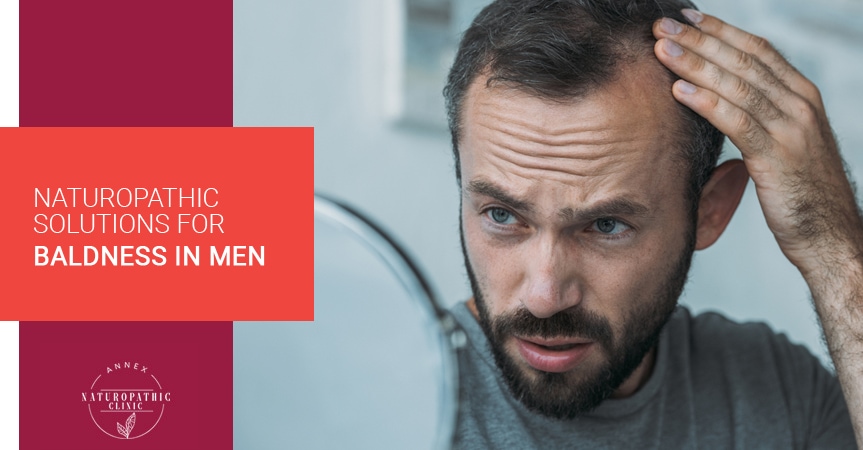 Naturopathic Solutions For Baldness In Men

Hair loss, also known as alopecia, can affect your entire body; not just your head.

It can be temporary or permanent depending on the cause.

It can affect people of all genders depending on a variety of factors.

But, men are more widely affected by alopecia than women.

The causes vary and can be the result of heredity, hormonal changes, medical conditions or associated with the aging process.

Some causes of alopecia can be treated, but a few of them can’t be helped.

Here at the Annex Naturopathic Clinic, we have naturopathic doctors for men that based in natural, non-invasive treatments designed to improve your health.

That includes alopecia too.

So, let’s get started.

What Is Baldness In Men?

Baldness in men (androgenic alopecia) is the substantial loss of hair from your scalp.

Depending on what causes it, there can be different symptoms and patterns.

The most common symptom is a gradual thinning of hair on top of the head.

Another example of a possible symptom are circular or patchy bald patches throughout the scalp.

It’s important to remember that sometimes, hair loss can be temporary, like in the case of chemotherapy for cancer.

This can result in full-body hair loss – including the scalp – but it usually grows back post treatment.

Whatever the cause, it’s a sensitive topic because of the drastic impact baldness can have on a man’s appearance; especially if the cause is untreatable.

What Causes Baldness In Men?

As mentioned earlier, there are a number of possible causes that result in baldness in men.

The following list is not exhaustive, but covers some of the most common causes.

An intense and extended period of hypothyroidism and hyperthyroidism can case loss of hair.

Often the entire scalp is affected and uniformly sparse.

Hair loss caused by this typically becomes apparent several months after the thyroid disorder has begun.

The good news is that regrowth is usually successful with treatment of your thyroid disorder; though it will take time to fully recover.

Occasionally, certain medications – like carbimazole (for some types of cancer) and propylthiouracil (for hyperthyroidism) can cause a pattern of hair loss similar to an extended period of hypothyroidism.

This can make it challenging to figure out the root cause – the drugs or the overactive thyroid.

There are a number of ways that dealing with chronic stress can cause hair loss.

One example is that significant stress can push a large number of hair follicles into a resting phase where they weaken and become prone to falling out when combing or washing your hair.

Another is that stress can manifest as an uncontrollable urge to pull hair out from your scalp or other areas in order to deal with uncomfortable feelings.

Finally, severe cases of stress can cause your body’s immune system to attack your hair follicles which also results in hair loss.

The good news is that hair loss caused by stress doesn’t have to be permanent.

There’s a strong chance that your hair will grow back if you can find ways to manage your stress. 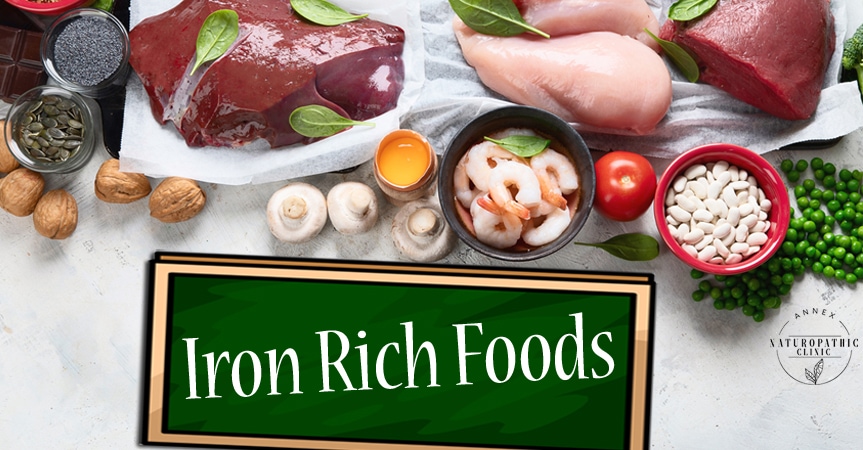 Most people realize that chemotherapy & radiation therapy as treatments for cancer can lead to hair loss, but a number of prescription medications do as well.

These include, but are not limited to:

If you’re experiencing hair loss after starting a new medication, talk to your naturopathic doctor about ways to mitigate the damage.

As expected, there are a few ways in which poor diet can cause baldness in men.

One example from a recent study found that a lack of protein caused by a sudden diet or drastic change of eating habits caused hair loss.

Low iron can also cause hair loss as explained by the Journal of Korean Medical Science.

Finally, too much vitamin A or selenium can cause hair loss too.

But, like many of the causes listed here, each of these possibilities can be reversed with dietary corrections.

Finally, hereditary hair loss with age is the most common cause of baldness in men.

Unfortunately, some people are genetically prone to this and there’s very little to be done about that.

Who’s At Risk For Going Bald?

Genetics play the biggest role in determining who’s most at risk of going bald and it’s a risk that increases as you age.

If you have close relatives with male pattern baldness, particularly on the maternal side, then you are most likely at a higher risk than someone who doesn’t.

To summarize, there are a variety of factors that can be the cause of your hair loss.

The good news is that many of these causes are treatable.

Please feel free to reach out to the Annex Naturopathic Clinic if you notice symptoms of persistent hair loss and are interested in pursing treatment.

We’re knowledgeable and here to help.