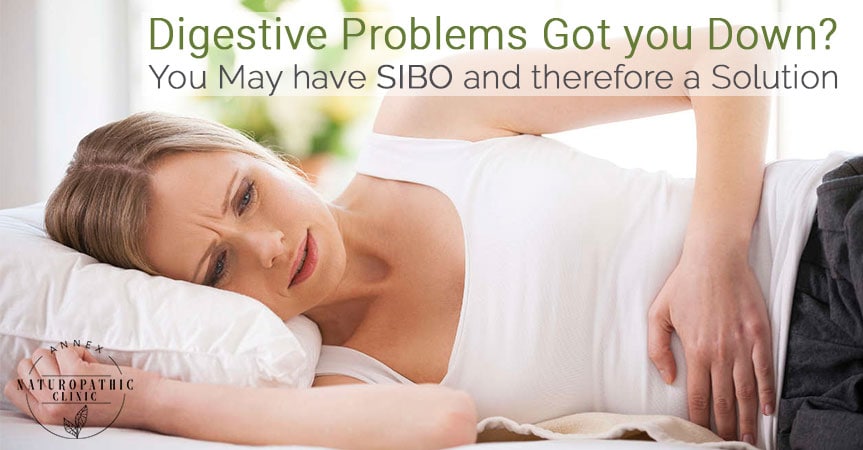 Digestive Problems Got you Down? You May have SIBO and Therefore a Solution

Have you been diagnosed with Irritable Bowel Syndrome?  Have your digestive concerns been worked up though ultrasounds, endoscopies and colonoscopies, only to come back completely normal?  Have you been told that your digestive problems are “just are what they are” and are left to just fend for yourself, avoid all the food, and live your life always worrying about how your stomach will react?

There might be an actual name for your nameless digestive problems, and it might just be called Small Intestinal Bacterial Overgrowth (SIBO).  At the Annex Naturopathic Clinic in Toronto, we can help you identify the source of your digestive problems and discover if you actually have SIBO or not.

In a healthy intestine the majority of bacteria resides in the large intestine, with minimal amounts present in the small.   SIBO occurs when an abnormal amount of bacteria colonize and grow in the small intestine, creating digestive problems that can affect the entire digestive tract including the intestines (small and large) stomach, liver, gallbladder and pancreas.

SIBO has well-documented in medical literature for a number of years, but it’s not until now that it’s becoming a well-accepted CAUSE of irritable bowel syndrome and chronic digestive concerns.  Studies have found that up to 85% of those diagnosed with IBS have test positive for SIBO  – this is a significant number that shouldn’t be ignored.

How does one develop SIBO?

Many cases can start with a simple stomach infection – this could have been on a trip to an all-inclusive resort, drinking pond water, or eating dirt as a child, and/or eating an undercooked burger.  A self-limiting, seamlessly harmless infection can disturb the normal intestinal flora, affecting and “reprogamming” the nervous system of the digestive tract, subtly causing dysregulation that can eventually becoming clinically significant as the years roll by.

Another reason why someone may be susceptible to developing SIBO is eating too frequently.  The contractions of the small and large intestines to move food forward are tightly timed to when you last ate.  It actually takes up to 2-3 hours for food to be pushed in to the large intestine from the small, and eating before this can actually halt this process.  This habit can eventually confuse the normal digestive program, and can eventually lead to improper signals and contractions in the intestines which can push bacteria around, flushing it in to the small intestine. 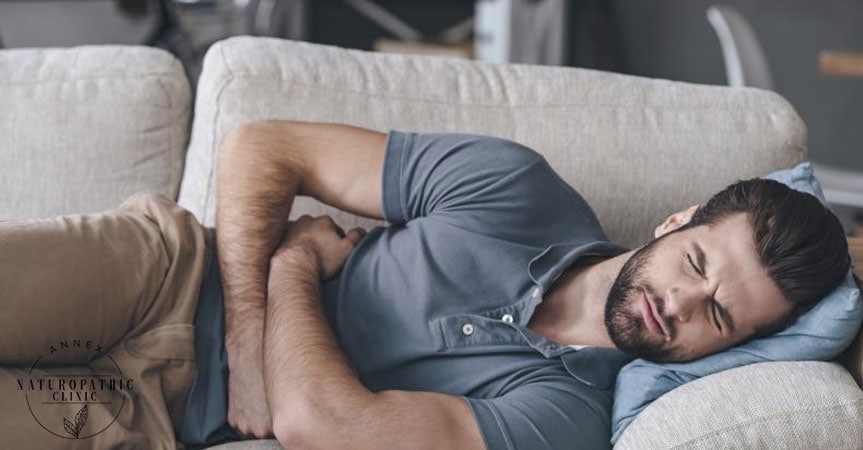 How to detect SIBO

SIBO is diagnosed through a simple breath test.  We offer this test at our office and many other functional medicine practitioners do as well.  Symptoms are major clues as to whether we determine if testing for SIBO would be appropriate for your case.  These include:

It’s important to treat SIBO as there are a number of conditions that can arise from untreated SIBO, such as

What do we do about it?

Treatment is based on wiping out the overgrowth using natural (but strong) herbal antimicrobials, as well as supporting the body’s natural detoxification centers (such as the liver).  We then botanicals, nutrients and dietary approaches to tone and strengthen the muscles and the nervous system of the digestive system, to create a system that is healthy, efficient and properly colonized by beneficial bacteria.

How long before I feel better?

SIBO Treatments if done properly, give people relief within TWO WEEKS and full treatment of SIBO typically lasts for 4-6 weeks in total (this can vary case by case).  If implemented properly, treatments are simple and straight forward.