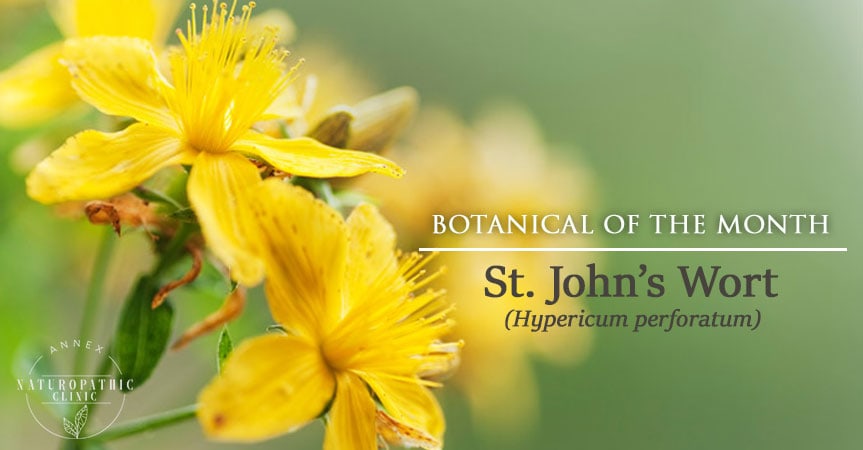 As a naturopathic clinic and dispensary, we like to educate our patients on how to take in local herbs and foods as part of their lifestyles for long term health.

Each month we’ve been highlighting a local, seasonal, Ontario herb in order to help you understand and familiarize yourself with useful medical herbs and foods that grow in our backyards.

This month we take a look at St. John’s Wort.

What is St. John’s Wort?

St. John’s Wort is a common plant that has been naturalized in North America, and can be found in Ontario (easier to find North of Toronto).

Hypericum perforatum displays beautiful yellow flowers from June to August.  It grows up to 1 meter high and has small, oval leaves which may have small black dots.

The fresh flowers contain glands that when crushed, will stain a dark vibrant red-purple colour, representing one of the key chemical ingredients of the plant, hypericin.

This colour is greatly represented in tincture and oil extracts of St. John’s Wort.  I saw an abundance of this gorgeous plant on a relaxing camping trip in the Lake Superior region, and is one of the most common herbal remedies I use in practice.

St. John’s Wort is not typically eaten but is used for medicine.  It has a number of different medicinal uses and has a strong affinity to the nervous system.

Traditionally, when taking internally, St. John’s Wort has been used as a sedative to treat nervous anxiety, and also is used to treat neuralgic pain.

Hypercum perforatum has been traditionally used to “clear liver heat” making it a useful remedy for liver inflammation (hepatitis).

There has been extensive research on the anti-depressant properties of St. John’s Wort, with many clinical trails exhibiting the benefit of this herb in the treatment for depression.

Isolating and administrating one constituent alone does not seem to provide the same anti-depressant effect as using the whole plant.  It is possible the combined (synergistic) action of many chemical constituents in this plant is what is responsible for the strong influence on the neurological system.

Flavonols and xanthines are other constituents found to have anti-depressant activity.  This is a beautiful representation of the importance of wholism where the entire plant is the of value, not only one microscopic ingredient of the plant.

St. John’s wort has been found to affect neurotransmitter activity by inhibiting reuptake of serotonin, GABA, noradrenaline, dopamine and L-glutamate.  Hypericum perforatum also inhibits binding of these neurotransmitters to their receptors.

This is a similar mechanism to how prescription anti-depressants work – inhibiting reuptake and binding of neurotransmitters.   Hypericum perforatum also appears to inhibit the activity of enzymes important in mood regulation, such as monoamine oxidase (MAO-A and MAO-B), and catechol-O– methyltransferase (COMT), both involved in neurotransmitter processing and elimination.

Hypericum perforatum has been found to be active against a number of  bacterial microorganisms, but it’s most powerful effect appears to be against viruses.

The anti-viral action  is specific to enveloped viruses, possibly through preventing the fusing of the viral envelope to the host cell. 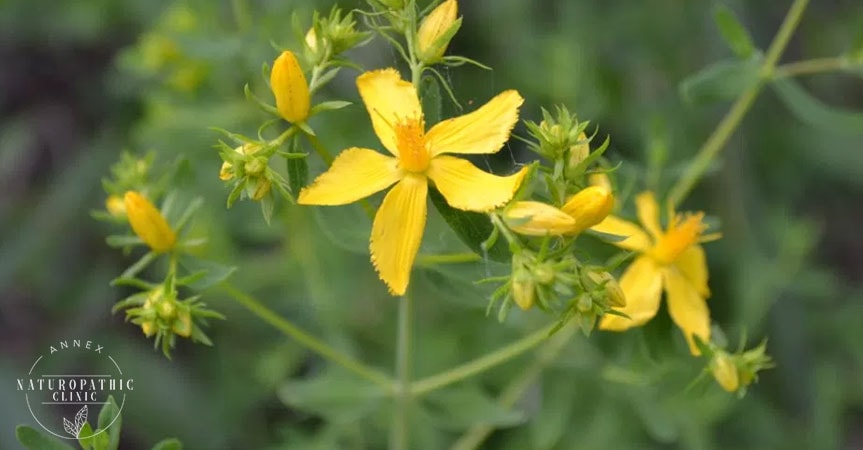 Hypericum perforatum is commercially available to take in a standardize capsule containing an alcohol extract of the herb, typically with a specific dose of the constituent hypericin.

This is the form that has been used in many clinical trials that have shown great benefit of this herb in the treatment of depression.

It is also efficacious in tincture form.  This is my preferred method as less processing of the herb preserves the essence and energy of the plant.

An oil can be made fresh flowers and leaves to be used topically as an anti-inflammatory and anti-viral.

Teas and decoctions are also made from this plant and may be best used for its anti-inflammatory, astringent and pain-relieving effects.

Clinical trails have shown alcoholic extracts of St. John’s Wort being most efficacious for treating depression, so the tea may not be the best choice if being used for this condition.

Do not use St. John’s Wort without consulting a physician who is familiar with herbal medicine.

Never combine St. John’s Wort with anti-depressant medication as this can potentiate the effect of the medication, potentially leading to overdose symptoms.  Anti-depressants medications are not just used for depression, but can be used to treat migraines, vertigo, and sleep disorders so it’s important not to combine herbal medicine with any medication without consulting a professional.

This plant increases the activity of a liver enzyme called CYP3A4, involved with phase 1 liver detoxication, therefore should not be taken if on medication that is metabolized by this enzymes as it can reduce the efficacy of the medication.

Hypericum perforatum can potentially (though rarely) cause photosensitivity in susceptible individuals, causing skin redness, so be cautious of this effect and discontinue if it occurs.

If you’re curious to learn more whether this herb might be suitable for you, consult with one of our NDs by booking a visit or contacting us.