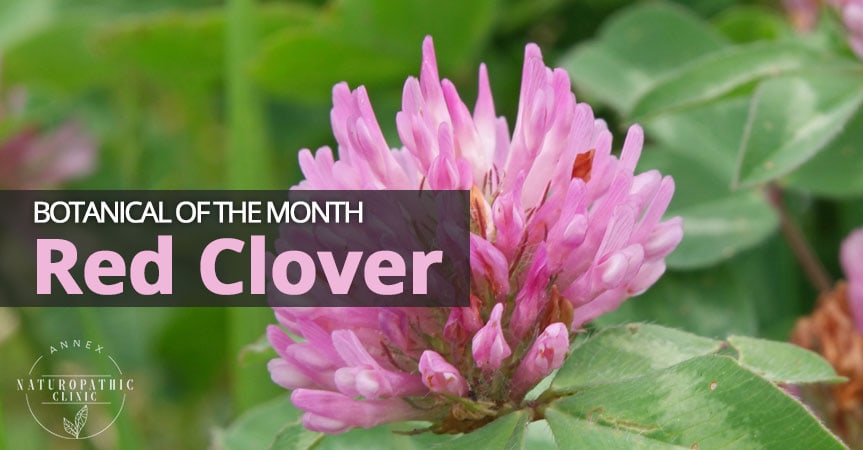 By:
Tanya Lee
Last Updated: August 10, 2022
As a Toronto naturopath, I like to educate my patients on how to incorporate local herbs and foods into their lifestyles for long term health. Each month I’ll be highlighting a local, seasonal, Ontario herb in order to help you understand and familiarize yourself with useful medical herbs and food that grow right outside your door. You will be able to recognize these otherwise known “weeds” as powerful medicine that grow in harmony with your everyday surroundings. We’re seeing Red Clover (Trifolium pratense) everywhere! My friend and I spotted these flowers earlier this July on one of our hikes and since then I’ve been seeing them on neighbour’s lawns, parks, along the west Toronto railpath, even in one coming up through a sidewalk crack. This is one of my favourite herbs to use in practice. Red Clover is a perennial plant originating from Europe, Africa and West Asia, but has been naturalized all over the world. It’s characterized by its dark pink-purple flowering head, and trifoliate leaves, and grows to be about 20-80cm tall. This plant is actually considered a legume/bean plant, being part of the Fabaceae/Papilionaceae family, which is home to many commonly known legumes such as peas, chickpeas, lentils and many beans. Parts Used: Flowers heads

Trifolium pratense flowers can be pulled off and eaten.  The flower parts stimulate the salivary glands, making it great for chewing on when you’re thirsty, or parched and don’t have immediate access to water. It can also be enjoyed as a sweet tea.

Red clover exerts its actions best in females and children.

Traditionally, red clover has been considered a “blood purifier” or “alterative” meaning that it cleans out and regulates the body. This action refers to the specific ability of red clover to remove unwanted toxins (dead tissue, inflammatory molecules) from the blood through lymphatic stimulation, and breaks up thick blood through anti-coagulant actions. Basically, it helps fluids to move efficiently throughout the body.  This action makes Red Clover particularly useful in the treatment of chronic skin conditions, such as eczema, psoriasis and acne, particularly in children. Red clover is also known to be used in coughs and bronchitis, particularly helpful in suppressing uncontrollable coughs, and in aiding the lungs to expectorate stubborn and accumulated mucus (Another pediatric application – is useful in children who catch the dreadfully persistent whooping cough). It action on the glands of the neck and sinuses also help clear post-nasal drip (stubborn mucus dripping down the throat from the sinuses). As mentioned above, red clover gently stimulates the salivary glands, making a great remedy for side effects of radiation or any condition where saliva production is compromised. It’s also great for single swollen lymph nodes

Red clover is useful in the treatment in women’s health conditions with either estrogen deficiency and estrogen excess. Red clover contains chemical called “phytoestrogens” (isoflavinoids) that actually binds and activates the estrogen receptor.  This make Trifolium pratense useful in mitigating menopausal symptoms, a life-stage for females characterized by declining estrogen. Symptoms such as hot flashes, sleeplessness, weight gain, vaginal dryness and anxiety, can be directly linked to estrogen deficiency.  However, the small amount of research studies on the effect of Red Clover on menopausal symptoms show mixed results in efficacy. Maybe it’s because the shape of phytoestrogens in red clover do not exactly fit the receptors in the vasomotor system (system responsible for many symptoms in menopause).  What if it fit perfectly in the other systems of the body with all different types of estrogen receptors? There is almost zero research on this effect of red Clover, but it’s a possibility. Estrogen plays a protective role in many aspects of female health, so when females go through menopause, they are at higher risk for cardiovascular disease, and osteoporosis. Not only can the phytoestrogenic effect potentially prevent these conditions, but the added antioxidant (flavinoids), and blood-thinning properties (coumarins and salicylates) also help. Here’s the controversy – if red clover contains phytoestrogens, wouldn’t that increase your risk for estrogen-dependent cancers? This is the question asked all the time when it comes to plants with phytoestrogen compounds, such as red clover and soy.  The answer isn’t simple, but if you want a simple answer, it’s probably not. Phytoestrogens do bind to estrogen-receptors, but they’re actually considered protective against estrogen-dependent cancer, such as breast and uterine.  This effective has been found in soy, another phytoestrogenic plant. This is because phytoestrogens can competitively bind to estrogen receptor, blocking cancer-causing Xenoestrogens (found in plastics, pollution, chemical cleaners, hormone-laden meats) from binding and overstimulating the receptor. When phytoestrogens bind to the estrogen receptors, the signal is less intense, more regulating (just like our own endogenous estrogens), and some phytoestrogens can actually block the signal, exerting an antagonistic estrogen effect. There hasn’t been enough research to confirm this clinically, however preliminary research studies has found taking red clover for a year does not seem to increase endometrial growth (leading to uterine cancer). However, due to the lack of strong evidence, it’s suggested that women with a history of estrogen-positive breast cancer, or uterine cancer, should avoid the use of Red Clover. 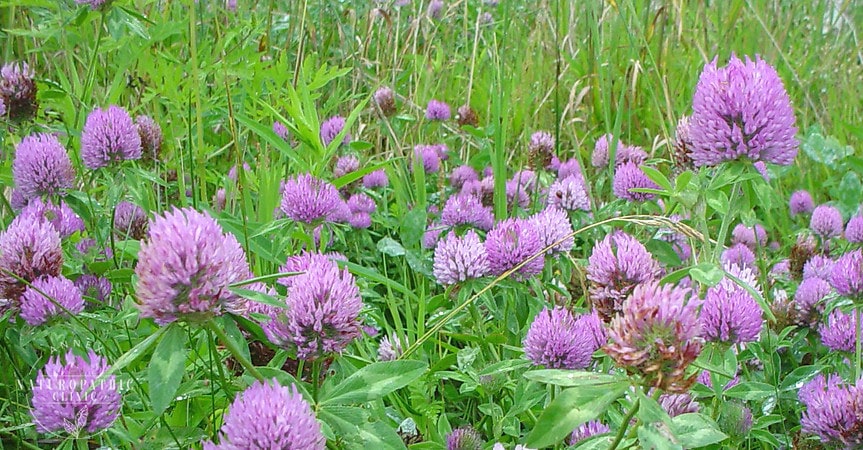 You can get red clover as a standardized capsule in powder form, basically taking it as a standardized pharmaceutical medication. There are many products on the market that will sell Red Clover in this form for the use of mitigating menopausal symptoms. Due of the lack of consistent in the evidence on whether red clover helps menopausal symptoms, the abundance of other herbs that treat these symptoms really well, and the lack evidence on the safety of this herb in estrogen-positive cancers, I don’t generally tend to rely on Red clover to treat these symptoms, especially at these higher doses.  Though daily consumption of the tea can be used as a nutritive food for post-menopausal women who would benefit from the phytoestrogenic compounds to prevent long term health problems associated with estrogen-deficiency. I like using Red Clover as a tea or as a low-dose tincture.  With the alterative “regulating” nature of the herb, and the consistent traditional use of Red Clover as a lymphatic stimulator, blood thinner and affinity to the neck and head glands , I generally tend to use Red Clover for regulating and detoxifying the body, specifically for the conditions mentioned earlier. In children, teas and low dose tincture have a strong effect but tend to be gentle enough to prevent any unwanted effects.

Do not use Red clover if you have history of estrogen-positive breast cancer or uterine cancer, if you’re on blood thinners, or have a clotting disorder.

Improve your health naturally, with the help of experienced naturopathic doctors Book An Appointment