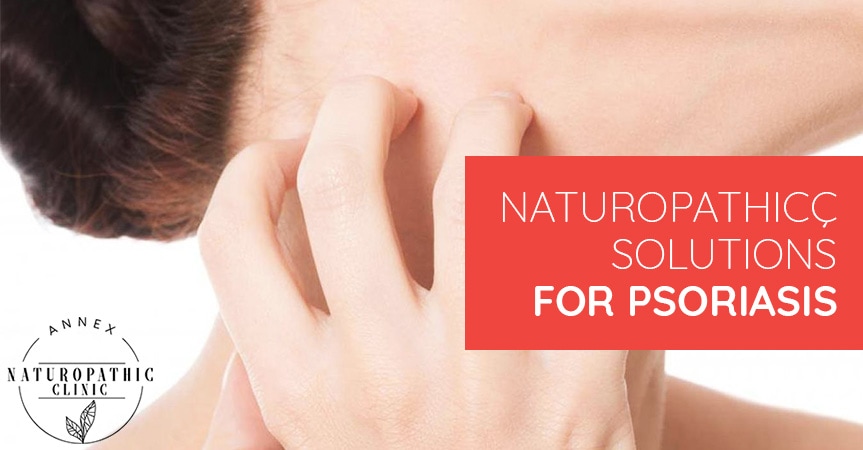 Psoriasis isn’t generally a life-threatening condition. But it can still be severe enough to greatly impact people’s lives.

That’s why people often turn to natural solutions for skin conditions such as psoriasis – because it’s sometimes the only help they can get.

Read on to find out more about psoriasis, and some natural solutions to help.

Psoriasis is your body’s immune system attacking its own skin cells. It’s not clear why this happens.

There is no cure for psoriasis. The typical conventional treatments for psoriasis work to suppress your immune reaction. This has the effect of reducing the severity of the inflammation. These only help within a limit, and are often riddled with unwanted side effects.

While we understand that there are certain reasons why someone may have to be on these medications to control your symptoms, there are also natural solutions can help you manage your symptoms.

Take Charge of Your Health & Wellbeing
Our naturopathic doctors can help you regain control of your health.
Book an Appointment

There are different types of psoriasis, all with different symptoms, locations and triggers.

If you suffer from psoriasis, but you don’t know which, here’s an overview:

To give you some idea, there are roughly 7.4 million Americans with psoriasis. Of those, 80% have plaque psoriasis (the rate is similar in Canada).

Plaque psoriasis shows up with red, inflamed patches, which will often have scales on top.

Plaque psoriasis is most often found on elbows, knees and scalp.

This form of psoriasis is most common in childhood, and causes small pink spots on the skin.

Unlike other forms of psoriasis, guttate spots are not usually raised or inflamed.

Children will often develop guttate psoriasis on their arms, legs and torso.

It is often surrounded by red and inflamed skin.

Pustular psoriasis is most frequently found on the hands and feet, and is more common in adults.

Instead of being white and crusty, inverse psoriasis is patches of bright red, shiny, inflamed skin.

It usually breaks out in areas where the skin folds. For example: under the breasts or armpits, or around the genitals and groin.

This is the one type of psoriasis that is so severe it can actually be life threatening, but it is luckily very rare.

This type can develop suddenly, and covers entire sections of the body all at the same time.

The skin may appear sunburned, but it will develop scales that fall off in entire sheets or sections. This can be dangerous.

If you develop erythrodermic psoriasis, please see a doctor immediately.

Symptoms are an obvious buildup of skin in the form of scale.

The scale often comes with redness and itchiness.

Whatever it is that triggers the immune system, it focuses on a patch of skin, and starts producing extra skin cells in an attempt to ‘repair’ the perceived issue.

These scales can get dry and crack, which can also cause its own pain.

Psoriasis is still a bit of a mystery to scientists and doctors. The most commonly accepted theory currently is that it’s caused by an overactive immune response.

Psoriasis is a hereditary condition, so if your parents suffer from it, you’re more likely to have or develop it.

As well, it seems to worsen in response to stress or other triggers, although these aren’t technically a cause of psoriasis.

However, the fact that these can worsen your case is enough of a reason to be aware of your stress levels. Consider other factors that may affect your condition as well. These may include alcohol, hormones and cold weather.

The short answer is: no, it’s not at all contagious, so you can feel free to hug that friend.

It may look suspicious, due to the redness of the skin. But it’s unlike other skin conditions you need to be wary of, as it’s completely harmless to anyone who doesn’t already have it. 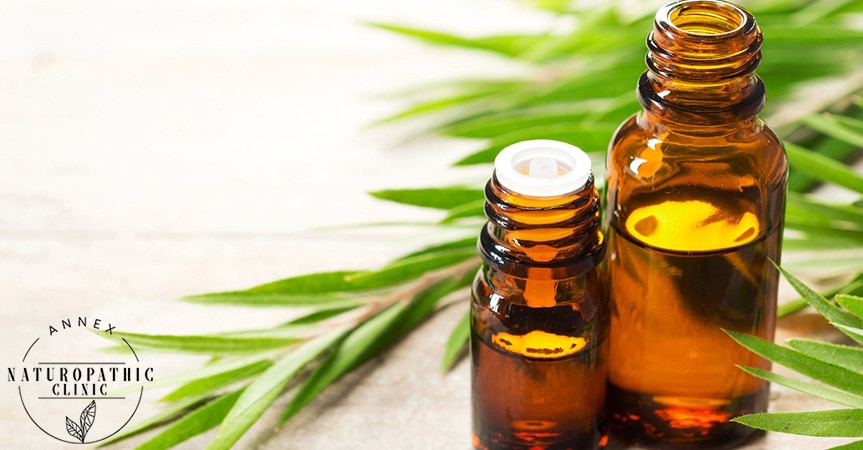 Because there is currently no known cure, we need to look at ways to deal with the symptoms. This includes reducing the frequency of flare-ups, scale build-up, and itchiness.

Here are some natural ways to manage your psoriasis, all topical.

If you’re ever advised to take any treatment, be sure to speak with your doctor. Certain medications – natural or otherwise – can interfere with other medications or be harmful for pregnant women.

Tea tree oil is a natural antiseptic that has many uses.

It’s gentle enough to apply directly to your skin, unless you’re allergic to it.

Shampoos with tea tree oil are a good way to deliver its helpful properties to scalp psoriasis as well. It has the added bonus of being a barrier to catching head lice.

Although many people report relief with tea tree oil, there are few scientific studies to prove it.

Oregon Grape – also known as Mahonia – is an herb with antimicrobial properties.

Make sure not to ingest this herb without medical supervision. Instead, apply it to the skin in a cream solution with 10% Oregon Grape.

The cream has been shown to be an effective treatment for mild to moderate psoriasis.

Organic apple cider vinegar is another good option. It can help reduce itchiness caused by scalp psoriasis, as well as other kinds of psoriasis.

Apply it to your scalp or skin several times a week. Be sure to rinse the area after application has dried, to avoid possible irritation.

If you feel a burning sensation when you apply the apple cider vinegar, dilute it with water in a 1:1 ratio.

One last note: if you have cracked or bleeding skin, don’t use apple cider vinegar. It’s going to hurt, a lot.

Curcumin is a powerful anti-inflammatory and antioxidant.

It’s an excellent natural way to fight inflammation in many forms, including the inflammation from psoriasis.

You can get curcumin in pill or supplement form. However, you can also find it in your spice cabinet – it’s the active ingredient in turmeric.

For better results, eat turmeric along with black pepper. The latter will increase the bioavailability of the curcumin.

Aloe vera has been used for generations to help with skin conditions and injuries.

Research has proven it can help reduce redness and some of the scaling that patients with psoriasis suffer from.

You can put the gel from the plant itself directly on your skin, or look for a cream that contains .5% aloe.

If you suffer from psoriasis, consider keeping an aloe plant in your home as a great backup to other remedies. Just don’t forget to water it every so often.

If you’ve found your way here because you suffer from psoriasis, you’ve come to the right place.

Call Annex Naturopathic now to book a consultation. We can help you explore natural solutions to your psoriasis.