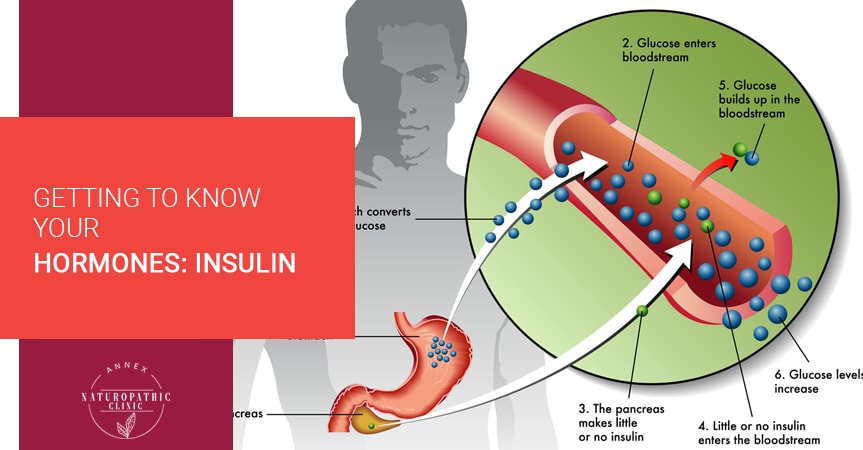 Getting To Know Your Hormones: Insulin

In recent decades, the number of people with diabetes has nearly quadrupled.

To combat the rise of this condition, learning about diabetes and insulin has become a priority in health education.

The root cause of diabetes and insulin disorders is when your body either won’t make enough insulin or stops reacting to it in a healthy manner.

When your body develops an insulin disorder it can greatly affect your quality of life.

Luckily there are natural solutions for autoimmune disorders like diabetes that can help in providing treatment for regulating your body’s hormone levels.

You may have some questions on the topic of insulin.

You may be wondering:

What does insulin do?

And how do I make sure my insulin levels are healthy?

Read on to find out.

To understand what insulin is, we first have to take a look at its counterpart called glucose.

Glucose is a sugar found in many carbohydrates.

Once glucose enters the bloodstream it becomes more commonly known as blood sugar.

When the body is in balance, glucose is used as an energy store.

It’s a substance that the body can break down and use as a pick-me-up on the molecular scale.

When glucose levels in the body are optimal, you don’t really notice it.

Your body simply functions in a healthy manner.

Your energy levels seem normal, and you go about your day.

Glucose only becomes an issue when it begins to fluctuate at unusual levels within your body.

This can mean either too much glucose or too little.

Insulin is a hormone released by your pancreas to keep glucose levels in check.

It acts as a regulator of glucose within your body.

It enables cells to absorb glucose and to use it for energy.

It also helps your body store glucose within your liver, muscles, and fat when you have too much of it.

What Does Insulin Do?

Insulin reacts to glucose in your body and aims to monitor its quantities.

Throughout the day your body will naturally experience fluctuations of glucose levels.

After a meal, your body works to break down the carbohydrates from your meal into glucose.

During that time, you will most likely measure a higher level of glucose in your bloodstream.

Once that glucose enters your bloodstream, insulin works to help your cells absorb it.

As insulin enables the cells to absorb the glucose, they can now use the sugars for energy.

When your body senses too much glucose, insulin signals for the excess to be stored in places like your liver.

This glucose remains in storage until your blood sugar levels decrease or your body needs more energy.

Glucose stores are commonly accessed in between meal times or during stressful situations.

In scenarios where your fight or flight response is triggered, your body accesses these glucose stores for energy.

As you can see it’s important for the body to have enough glucose on hand.

But when the amount of glucose in the body becomes too high it can have severe and fatal effects.

So what happens when your body doesn’t produce enough insulin to regulate its glucose cycle?

When your body has low levels of insulin it can lead to hyperglycemia, or high blood pressure.

Hyperglycemia is the scientific term for when someone’s insulin production levels are so low that they fail to properly regulate glucose levels.

When your pancreas doesn’t generate enough insulin to help cells absorb glucose, a lot of the sugar will remain in your bloodstream.

It’s important to know when your insulin production levels are on the lower side, and to start a treatment plan before it becomes worse.

Some symptoms may be found through self-monitoring, while others may require assistance in identifying.

Early signs and symptoms of low insulin may include:

Later signs and symptoms may appear as:

If you are experiencing any of the symptoms above, contact your naturopathic doctor.

Your health is important, and early detection is key to managing symptoms before you may be diagnosed with type 1 diabetes or type 2 diabetes . 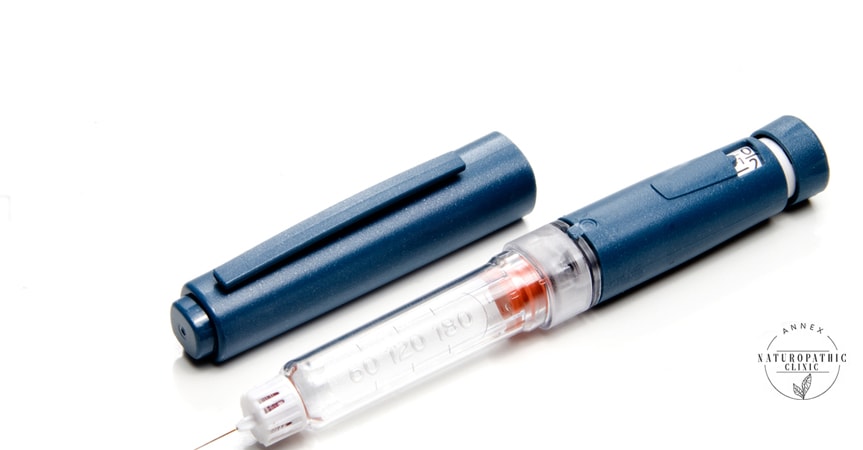 What Is Insulin Resistance?

Insulin resistance is when cells within your body stop reacting to insulin in the correct way.

This incorrect response creates a domino effect of issues that can affect areas of the body even outside the glucose and insulin cycle.

When cells no longer react to insulin they stop absorbing glucose and blood sugar levels start to soar.

This surge of glucose pushes the pancreas to respond by pumping out even more insulin.

The ending result is a bloodstream filled to the brim with both glucose and insulin.

The scientific name for this condition is hyperinsulinemia.

When you suffer from insulin resistance you may notice symptoms such as:

If you are noticing any of these symptoms, we recommend you speak to your naturopathic doctor to have them assess you.

From your consultation, your medical professional may inform you of further symptoms such as:

If left undiagnosed, insulin resistance may lead to pancreas damage, and if glucose levels continue to rise you may develop type 2 diabetes.

Insulin resistance can develop out of a myriad of factors, both genetic and lifestyle-induced.

One common cause is obesity.

Researchers have found that a high level of fatty acids in the blood can lead to insulin resistance.

Since increased fatty acids in the blood are caused by consuming too many calories and retaining high amounts of body fat, the correlation between obesity and insulin resistance appears to be strong.

In particular, belly fat can be linked to increasing your chances of insulin resistance.

Carrying dangerous belly fat, also known as visceral fat, around your organs may release inflammatory hormones and fatty acids into your bloodstream.

Other potential causes include:

It has been claimed in the past that folks of Hispanic, African, and Asian descent are more susceptible to developing insulin resistance.

However without proper studies researching how oppressive systems and culturally induced poverty factor into those claims, it would be irresponsible to attribute race solely as a factor in susceptibility to the condition.

It’s possible that the stress of lower socioeconomic status and impacts of cultural bias play a larger role than simply race.

Using Insulin As Treatment For Diabetes

Injecting insulin can provide treatment for both type 1 and type 2 diabetes.

In the case of type 1 diabetes, you’re unable to create your own insulin, and so injecting it helps with the maintenance of glucose levels.

With type 2 diabetes, you can often combine oral alternatives and lifestyle changes to improve your condition.

However, when oral medications and lifestyle changes aren’t effective, those with type 2 diabetes also must inject insulin.

Overall insulin has the same function for both types, however, there are different types of insulin injections.

These types are based on the release time and the duration of time the insulin stays in your body.

The four primary types are:

When used appropriately insulin can make a huge difference in your quality of life while living with diabetes.

However, it’s worthwhile to also note that using too much insulin may result in blood glucose levels that are too low.

If you are using insulin, you should also carry with you at least 15 grams of fast-acting carbohydrates such as two tablespoons of raisins for safety.

Insulin is just one of your body’s many chemical messengers, there to signal your body what to do.

If you read some of the above symptoms and related to it, you may be dealing with insulin resistance, which is often the first step toward developing diabetes.

However, there is hope.

Naturopathic solutions can help you manage your condition.

Book an appointment with Annex Naturopathic today to find out how.