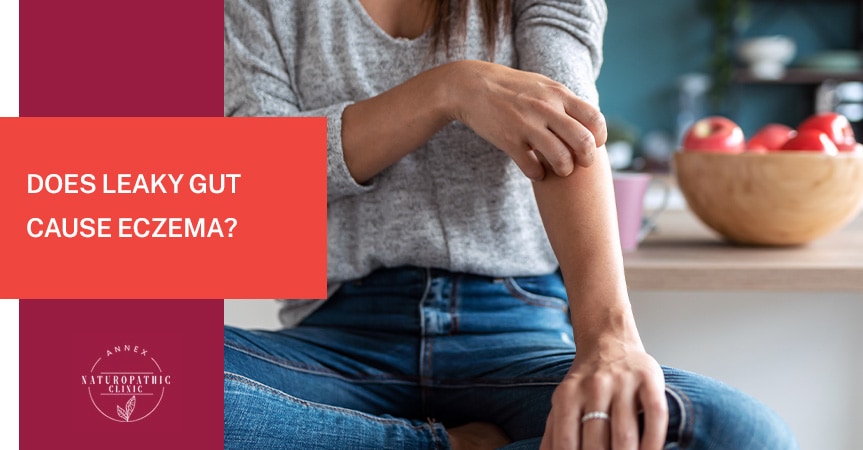 Does Leaky Gut Cause Eczema?

Eczema or Dermatitis is the name for a group of diseases that cause the inflammation of the skin. When people discuss eczema, they generally refer to the most common form, atopic dermatitis, which is hereditary and affects 17% of Canadians at some point in their lives.

Usually developing in children under 5 or their infancy, Atopic Dermatitis is characterized by itching, redness, and bumpiness of the skin, usually behind the knees, the inside of the elbows, and on the face, neck, and hands.

While the causes of eczema aren’t fully known, there is scientific evidence that suggests a link between eczema and the health of the intestinal microbiome. Further research indicates that probiotics rich in lactobacillus acidophilus and fibre-rich foods that feed the colony of gut bacteria can significantly help in the management & prevention of symptoms of atopic dermatitis.

Because food allergies cause flare-ups in many patients, they often ask how food can cause eczema flare-ups without being in contact with their skin in the same way that other triggers do (clothes, weather, dust, etc.). One reason for this could be leaky gut syndrome. Food allergies are generally characterized by inflammation of the intestines, a condition that is also closely associated with a leaky gut.

This blog further examines the relationship between gut health, leaky gut, and eczema to see if treating one condition could also help manage the other.

What does “leaky gut syndrome” mean?

Not unlike the skin that prevents foreign particles from being absorbed into the body, our intestines have an extensive lining that forms tight barriers between the intestine and the bloodstream, carefully preventing unwanted particles like food particles, metabolic waste, other microbes, and toxins from entering the bloodstream.

When these tight junctions cease to function properly and the lining develops cracks or holes, the passage of unwanted particles into the bloodstream triggers an inflammatory reaction that also affects the friendly microbes in the gut. This phenomenon is known as a leaky gut syndrome.

As the gut is home to a variety of good microbes that are deeply intertwined with the immune system and have many immune cells located in it, it acts as one of the human body’s vital disease-fighting systems. Because leaky gut disrupts what enters the bloodstream and what does not, the body’s autoimmune response is often triggered.

Under normal circumstances, the immune system that would be fighting pathogens like viruses now starts attacking its healthy tissues and cells. This can lead to chronic inflammation, which is closely associated with many health conditions including eczema, asthma, psoriasis, and even autism.

Is there a connection between leaky gut and eczema?

Increased levels of toxins in the bloodstream due to leaky gut syndrome make the body attempt to eliminate them. As the skin is one of the largest elimination organs of our human bodies, it has been suggested that eczema flare-ups are a sign of the body trying to expel the toxins.

In the same vein, leaky gut syndrome, also known as intestinal hyperpermeability, has been linked to a variety of skin problems, including rashes, eczema, and psoriasis. According to the Atopic Dermatitis forum, several studies have also found a higher prevalence of leaky gut in people suffering from eczema, some showing those links as early as infancy.

A study conducted in the UK found that children suffering from eczema had a significantly higher incidence of leaky gut when compared to children without eczema. Another study also found a correlation between leaky gut and eczema severity.

Is eczema related to gut health?

Eczema has been linked to an insufficient diversity of gut bacteria in some scientific studies. It is also important to note that due to its involvement in fighting diseases, poor gut health also plays a role in triggering a sensitive immune response, such as in the case of eczema. Researchers also found that the gut bacteria of people with eczema differ from those without, and since using probiotic therapy has been demonstrated to treat symptoms of eczema by altering gut bacteria, it is safe to say that gut health impacts how patients can manage atopic dermatitis.

Can eczema be caused by a leaky gut?

Eczema can be caused by hereditary factors, food allergies, or an overactive immune system. However, since food allergies and autoimmune responses are linked with both eczema and leaky gut syndrome — they are closely associated with each other.

It is also important to recognize the role of poor gut flora in the onset of both conditions. The health of our microbiome can contribute to the health of our intestines, but the opposite is also true, meaning that a leaky gut can lead to an imbalance in microbiome diversity, causing eczema flare-ups.

In a study published by Columbia University Medical Center researchers, a strong link was revealed between gluten allergies and increased intestinal permeability. Gluten was found to cause leaky gut symptoms in people with celiac disease and irritable bowel syndrome.

On the other hand, the presence of leaky gut in healthy individuals not suffering from these other health conditions remains disputed. However, a study conducted in 2015, concluded that exposure to gliadin (a glycoprotein found in gluten) caused intestinal permeability in all people, but affected those with gluten sensitivity and celiac disease more.

A lot of patients with leaky gut, regardless of their gluten sensitivity, report that they feel better when they don’t eat it — a claim which is now being supported by these studies.

The yeast Candida lives in the gut together with other microbes. Their existence does not harm the human body when their numbers are healthy. Conversely, candida overgrowth is associated with a leaky gut. Lifestyle factors that interfere with the balance of gut bacteria can also lead to candida overgrowth, which can further lead to candida infections, inflammation, and leaky gut syndrome.

Similarly, SIBO or Small Intestinal Bacterial Overgrowth in the small intestine can damage the digestive system and lead to problems such as malnutrition and leaky gut.

As the leaky gut syndrome is often accompanied by an inflammatory response in the body, many physicians recommend cutting out inflammatory foods such as foods high in gluten, soy, corn, and dairy.

It is true that not every food group will cause inflammation in all individuals, but the goal is to reduce processed sugars and alcoholic beverages to see which trigger inflammatory reactions. In addition, your doctor may recommend a diet high in fibre and vitamins to help combat the effects of eating the Standard American Diet, which is high in fried food and processed sugars.

Long-term use of antibiotics or non-steroidal anti-inflammatory drugs (NSAIDs) such as Aspirin may also cause intestinal permeability.

The excessive use of NSAIDs and antibiotics has long been associated with bleeding and ulcers in the small intestine. In addition, studies have shown that long-term use of these pharmaceuticals can disrupt and change the gut microbiome, which is a major factor in the onset of leaky gut syndrome.

Several animal studies show that NSAIDs can compromise the gut lining and increase gluten sensitivity, while another suggests that even a 600 mg dose of aspirin can increase intestinal permeability.

Many links exist between gut health and the prevention of leaky gut as mentioned throughout this blog. To add, according to this article published in 2016, gut microbiome imbalances can trigger an autoimmune response that can lead to inflammation and a leaky gut.

Signs and symptoms of a leaky gut syndrome

While the exact cause of Leaky Gut is unclear, the following factors have been found to increase intestinal permeability. Symptoms may differ from person to person, and someone may have several symptoms at once.

How do you diagnose a leaky gut?

Though there is no official diagnosis for Leaky Gut Syndrome which can indicate how leaky your gut is, there are other factors that can be tested to find out if you have the condition.

Although conventional medicine attempts to treat symptoms of eczema with pharmaceuticals such as a corticosteroid cream or ointment that can moisturize the dry skin, antibiotic creams for bacterial infections, and in severe cases, use of oral corticosteroids — they are linked with severe side effects such as skin thinning, sun sensitivity & cancer risk.

If you have been diagnosed with leaky gut, your doctor may treat the symptoms of leaky gut to help you manage your eczema flare-ups. According to the National Eczema Association, since diet has been linked to both leaky gut syndrome and atopic dermatitis — it should be the first point of intervention.

How do you treat leaky gut eczema?

As we have already established, food allergies and intolerances can trigger both leaky gut syndrome & eczema flare-ups. By determining food allergies ahead of time, you will know which foods to avoid as your child grows up.

Even if your child outgrows his food sensitivities at some point, avoiding foods such as gluten, soy, dairy as well as foods rich in processed sugars, can help in effectively managing the symptoms of atopic dermatitis.

These foods are all linked to an inflammatory response and eliminating them from your diet is often recommended by medical professionals:

What should I eat if I have eczema?

Foods that optimize the gut flora

One of the easiest ways to optimize gut flora is to eat food that supports gut health naturally. Some of these include:

Incorporate foods that have an anti-inflammatory effect

If a treatment plan includes the elimination of foods that cause an inflammatory response, likely, your healthcare practitioner will also recommend the intake of natural anti-inflammatory foods. The focus for dietary counselling will also be to recommend foods that naturally improve your overall gut health.

Some of these include:

Probiotics are excellent for improving gut health since they are made up of healthy microbes that reside in our gut microbiome. Although consumption of fermented foods may help in improving their numbers, additional probiotic supplements can help you manage your leaky gut eczema more effectively.

Supplemental probiotic supplementation can help in strengthening the gut lining and improving the overall digestive function when used along with a healthy diet containing vitamins B6 & C. They are generally safe to consume and can be effective in reducing the immune response of the body. This can help manage eczema more gently.

Many probiotics are available today, but those that contain Lactobacillus rhamnosus GG, the most well-researched probiotic bacteria, are recommended. For most people, the recommended amount is between 10 and 20 billion CFUs per day, but your doctor may recommend a different amount based on your condition.

As eczema is characterized by dry skin and itchiness, natural topical ointments that help to manage the itchiness may be prescribed by your healthcare practitioner. Special moisturizers that treat dry skin can also be effective in reducing itchiness and redness caused by eczema flare-ups.

Leaky gut is the phenomenon of increased intestinal permeability wherein the junction between the intestine and the gut that prevents spillage of larger particles into the bloodstream is affected. This dysfunction often triggers an inflammation and immune response from the body, which can result in eczema flare-ups.

Although clear causes of both conditions are unknown, we do know from enough scientific research that both share an association. Whether leaky gut is the primary cause of atopic dermatitis remains to be established with further research.

Probiotic therapy and a good diet rich in dietary fibre, vitamins & minerals can be effective treatments for both preventing and managing these health conditions.