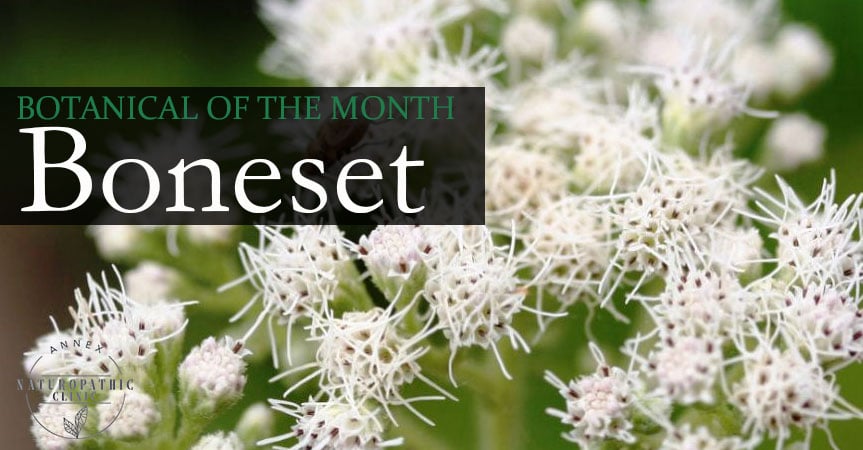 Botanical of the Month – Boneset

At our naturopathic clinic in the Annex we always get asked around cold and flu season what someone should take to ward these off.

I think it’s an appropriate time to write about a herb that is useful for the prevention and treatment viral infections.

We all know about echinacea and the fantastic benefits in the prevention of cold and flu, but one of the most underrated herbs that can also be used grows right in our forests and marshes.

Eupatorium perfoliatum (Boneset) is a beautiful three-branched, white flowered plant that grows along creeks and marshes and can grow up to 5 feet tall.

This plant is native to North America and flowers and matures from the mid-summer to fall.

It is one of the most coveted cold and flu remedy by Native medicine has been used extensively throughout Europe for these properties.

Boneset is very bitter (due to the constituents, sesquiterpene lactones), and has a strong profile of medicinal constituents so is not typically eaten as food.

Boneset is considered a panacea for treating acute and viral infections by traditional native medicine.

It was historically used to treat “bone-break” fevers, fevers caused by Dengue fever so intense that it was described like pain as if your bones are breaking, hence the common name.

Since then it has been traditionally used to treat any fever-inducing infection – this property is called a “diaphoretic”, in which it makes a person sweat during a fever, allowing the fever to break.

This is a great remedy for those with “intermittent fevers” where the fever produced is never strong enough to actually kill off the infection and “break”, causing the a person to stay ill for longer periods of time.

Boneset is thought to induce a fever by activating the immune system through stimulating white blood cells to fight off the infection. This herb also exhibits anti-microbial and anti-malarial properties, but more research is needed to confirm these effects.

Despite the presence of only preliminary evidence, Boneset is considered one of the best treatments for cold and flu by traditional herbalists, with many case reports revealing the powerful activity of this herb against cold and flus.

This warrants better and more detailed investigation of this herb by researchers interested in herbal remedies in infections.

Boneset is a good alternative to the herb Echinacea as Echinacea only tends to be strongly effective when taken at the beginning stages of the flu, while Boneset works well for beginning stages as well as during the active, mid-flu stages. 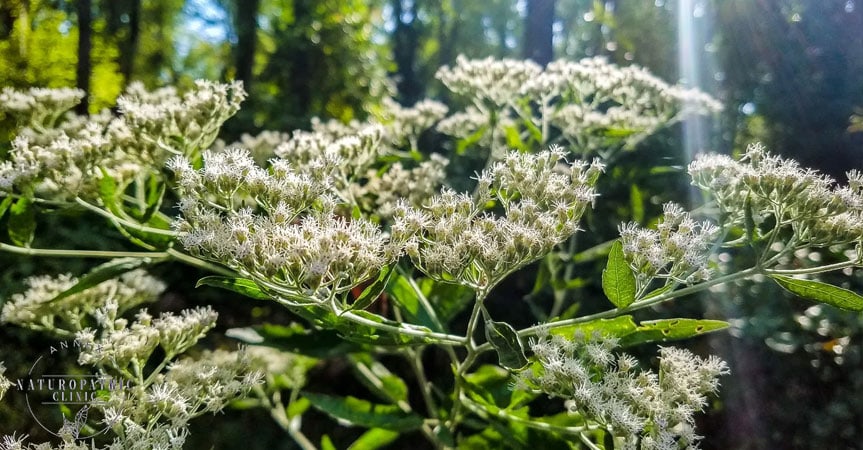 Boneset has also been traditionally used to treat arthritis and other inflammatory diseases.

A  number of constituents present in Eupatorium perfoliatum have been found to exhibit strong anti-inflammatory activity by inhibiting the formation of a inflammatory factor, NF-Kappa-ß.

Boneset is taken in both tincture and tea/infusion forms.

Traditionally, hot infusions are taken for acute conditions when the patient needs to increase their body temperature for the fever to break and kill off the infection.

Then a cold infusion is taken as a tonic when the body needs to heal after the fever has broken.

The cold infusion in general is taken when the body is weak, making it a more suitable form for those feeling fatigued and pained.

As mentioned the book Medical Herbalism: Materia Medica and Pharmacy, this very dichotomy ofadministration represents the signature what the herb is meant to treat – dual symptoms (ie fevers and chills from infection).

The tincture is administered by drops as this herb is considered very strong and does not need to be given in high doses.

This herb is to be taken in small amounts – it has a powerful “emetic” effect, which makes a person vomit and does have laxative effect.

These effects were actually used medicinally by traditional herbalists to help a sick person detoxify, but is considered undesirable effect in modern medicine.

For this reason, never take this herb unless you’re being monitored and treated by a healthcare professional who is familiar with the specific dosing of this herb.

If you’re interested in learning more about how to use this effective herb during the upcoming cold and flu season, feel free to book an appointment.